Camie Gordon Lowrey
Marjoly is a legendary human witch from the human world, and the antagonist of Rhapsody: A Musical Adventure. Due to her clumsiness, she's not a typical villain trying to take over the world. She's also quite vain; the lyrics of her character song, "Petals of Evil" or "Evil Queen", describe her as "More powerful than God, the devil is my slave: more beautiful than the goddess, I put her face to shame".

In her debut game, Rhapsody: A Musical Adventure (part of the Marl Kingdom series), she supposedly fell in love with Prince Marl E. Ferdinand, and meant to to teleport him to her castle, only to screw up the spell and accidentally turn him to stone. In a later Marl Kingdom game, Marjoly is shown to have a rival in Akurjo, who has three separate vassals that have rivalries with Marjoly's own.

Marjoly has three vassals whom are referenced in later games: Gao, Crowdia/Claudia and Myao (Myao is also featured in Phantom Brave).

In Hymn Princess of Antiphona, Marjoly makes an appearance within the game, and from what early screens have shown, the game takes place before the Marl Kingdom games, as she appears to be much younger looking in comparison to how she appears now. However, it could also be argued that she used a spell to regain her youthful looks. She also wears clothes, as a sharp contrast to her earlier appearances, where her attire could be more described as a swimsuit.

Appearances in the Disgaea series[]

Marjoly makes an appearance in the optional Beauty Castle stage in the first Disgaea game, where she becomes a playable character after her defeat. Etna comments on her attire and makeup, but recognizes her as the most malevolent witch in the universe. Laharl, obviously, wants to see who really is the most malevolent. At level 2500, she joins the party at the highest level of all the playable characters. (Although in the remakes, Zetta takes this role at level 3200) The three (four in remakes) items she comes equipped with are named after her vassals.

In the remakes' Etna Mode, Etna and her Prinny servant enter Marjoly's Castle, only for the witch to appear before them. Etna explains the witches' background while subtly mocking her. After the battle, Marjoly disappears, preventing recruitment. The Prinny claims that the only reason the battle took place is due to Etna mocking her.

In Disgaea 2, Marjoly appears again in the Beauty Castle, where she appears to be under the control of a seal unleashed upon her by an unknown force, robbing her of her voice and much of her power.

Rozalin has heard of many of her accomplishments although she noted it was odd that Marjoly was not living up to her signature trademarks of talking or making jokes. Upon Marjoly's defeat, Rozalin ironically comments on how a seal can drastically affect what was supposed to be a very expressive personality. To make up for her lack of expressiveness, Marjoly gives the party Sexy Panties.

In the PSP remake, Disgaea 2: Dark Hero Days, she appears in the same way as in Cursed Memories. However, beating her also unlocks a bill that if passed will unlock Marjoly as a playable character. She claims that she wants to use her powers but will only join on the condition that the player will bring her a hot stud.

She is also among the many Netherworld Prodigies who had joined forces with prodigies from other worlds to create Pringer X, although the exact reason for this is not made apparent. Following Pringer X's rampage, she flees alongside her co-conspirators. It is evident for the duration of the project that she flirted vigorously with Aramis.

For Disgaea 3, Marjoly has become DLC. In it, she appears to become an Evil Academy teacher. However, Mao and the group have no idea what the Rhapsody series is and (like Etna before) comment on her age and excessive use of makeup. She says that her class would be a magic class. Mao challenges her to see if she could be a teacher. Marjoly is defeated, but Raspberyl says that not hiring her would be a waste,(pointing out she meagerly help back) so Mao hires her as a teacher. Despite this, Marjoly only takes the job under the agreement that Mao finds her a "Darling Young Boy with a tight ass and a beautiful smile". Her Magichange has her becoming a golden staff.

Despite being a Monster Unit, Marjoly is one of the most powerful magic user, able to use all four Elements up to Omega tier (Tera in Absence of Detention) while sustaining reasonable damage, quite like Emizel in A Promise Unforgotten ; Pram can only use Ice and her random Evility makes her less flexible. Her Magichange being a Staff, coupled with her Evility Witch Power (+100% of magic power to the holder when Magichanged) can give any magic unit powerful stats, making Marjoly one of the best DLC. Given the frail constitution of the magic users, it's a typical "glass cannon" strategy. Marjoly's weak points are her very poor jumping ability, so she can stay stuck in front of a wall (especially in the Item/Class World) as well as a Defense/Vitality not so high, even though quite higher than a standard Mage. 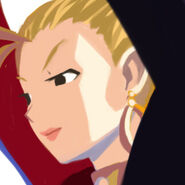