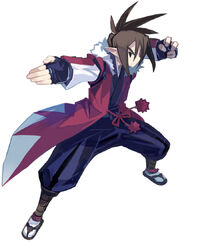 The Male Samurai is a recurring class in the Disgaea series. Trained in the eastern frontier of the Netherworld, Samurai are constantly training and preparing for battle. Samurai have good manners and are very devoted, being willing to give their lives for their masters. Like their female counterparts, they are former guardians of the Netherworld's holy grounds and follow a belief system called "Bushi Road".

Unlike their Disgaea: Hour of Darkness predecessors, Samurai are male. They are recruited by having a unit with a Sword Mastery of 5, then passing the associated bill in the Dark Assembly.

The Male Samurai can be unlocked by leveling both a Warrior and a Ranger to level 35.

Samurai can be either male or female, each having proficiency with katanas and spears, but of note is that the male Samurai is able to use the rare Fishing Pole.

Retrieved from "https://disgaea.fandom.com/wiki/Male_Samurai?oldid=43983"
Community content is available under CC-BY-SA unless otherwise noted.