The Male Martial Artist is a Humanoid class in Disgaea: Hour of Darkness and its remakes. The Martial Artist is known for being a starter class with a high counter and movement rate, along with being great with Fists. A downside of this class, however, is that their Defense and Resistance often lags behind all their other stats, and the Aptitudes of these stats is low even for the higher tiers as well; so while they can cause a lot of damage, they also often can't take a hit, leaving them wide-open to being destroyed by strong attacks, especially from Magic users.

A plus to having a low aptitude in defense, however, is that Male Brawlers can equip Belts effectively, since the Brawler will receive the full attack boost from the belt, but will only receive part of the defense subtraction.

The only difference between the Female Martial Artist and the Male is that Males have a slightly better defense, but a slightly worse resistance.

“These martial artists are lonely warriors who train their bodies to the extreme to master their own path. They have a dark battle aura around their bodies, so they can fight against blades and bullets with bare fists. They say that Netherworld martial artists originated from a legendary human martial artist who came to train himself, but the truth is unknown. Martial Artists are a combat clan who only believe in strength.”
—The World of Disgaea “A true warrior who pushes himself to his limits. These fighters can battle enemies with guns & swords equally, by using his Dark Hadou. The original master of this martial art is rumored to be a legendary human street fighter. Power is justice and the only truth.”
—Disgaea DS collection book 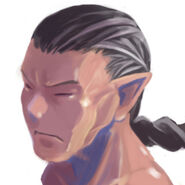 Martial Artist's Artwork
Add a photo to this gallery
Retrieved from "https://disgaea.fandom.com/wiki/Male_Martial_Artist_(Disgaea)?oldid=46501"
Community content is available under CC-BY-SA unless otherwise noted.