The Male Healer is a starting class in Disgaea: Hour of Darkness. The difference between a Male Healer and his female counterpart is that the male has less aptitude in HP and Defense, but better aptitude in Hit and Attack.

A healer is a requirement of any good Disgaea team, as a player's characters will require healing on some of the larger maps when enemy numbers are far greater than the player's, during long trips into the Item World, and to heal status problems, which frees up a player's inventory from HP-healing items.

Since the healer is the only starting class that has a semi-good proficiency in Bows, some players like to initially equip their male or female cleric with a Bow to unlock the Archer class, and also to earn some Mana. Once the archer is unlocked, players will often switch weapons to the Staff, which the healers are much more proficient with, and also create a |Mage or Skull pupil for the healer so the healer can also learn offensive magic.

Note that the Male Healer has higher Aptitudes in ATK and HIT than his Female Counterpart, but has even weaker HP and DEF than she does. They are both equal in INT power, though.

Male Healers should be kept at Long-Range at all times, attacking with Bows or Offensive Magic while supporting allies with Healing spells. Muscles can be given to a Healer, allowing them to eat more attacks, ensuring survival against high-level enemies.

Spell Ranges are dependent on Staff mastery and skill level. 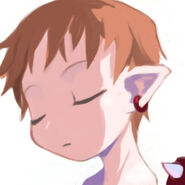 Male Healer's Cut-In Image
Add a photo to this gallery
Retrieved from "https://disgaea.fandom.com/wiki/Male_Healer_(Disgaea)?oldid=41120"
Community content is available under CC-BY-SA unless otherwise noted.