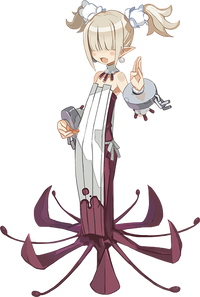 The Male Healer (also known as Clergy and Priest) is a recurring class in the Disgaea series first introduced in Disgaea: Hour of Darkness.

Despite being demons, they have no ill will towards humans or Celestia. Unlike their female counterparts, they believe healing those wounded in battle is a sin, so their beliefs require them to wear handcuffs and barbed robes. It is said that they knew about magic before science proved its existence.

The Healer class was introduced in Disgaea: Hour of Darkness as one of the starting classes.

While missing from Disgaea 2: Cursed Memories, the Healer class returns with a new design in Disgaea 3: Absence of Justice as a starting class.

After being missing in Disgaea 4: A Promise Unforgotten, the Male Healer returns in Disgaea D2 as a starting class, again with a new design.

The Male Healer returns in Disgaea 5.

The Male Healer (known as a 'Mystic') is most proficient in Healing and Physical Attacks; acting as more of a jack-of-all-trades than a purely supportive unit. He also gains more buffering spells than his female counterpart. They come with the skill of 'Healing Birth' at level 20, which heals their HP immediately upon being confined.

The Male Healer (known as the 'Medic') is proficient with Flamethrowers and Rifles, since it is often positioned on the front lines of wars. However, it is also proficient with daggers and Syringes, much like the female healer counterpart.

Soul Nomad and the World EatersEdit

The Male Healers of Soul Nomad are best positioned in the back of the squad, so that their attack becomes 'Heal All', which heals the whole squad whenever they attack. As the leader, their special attacks and tactics all circle around healing allies or their own squad, or increasing allies' or their own squad's Defense and Resistance

Clergy artwork from Disgaea 3: Absence of Justice
Add a photo to this gallery

Retrieved from "https://disgaea.fandom.com/wiki/Male_Healer?oldid=46266"
Community content is available under CC-BY-SA unless otherwise noted.