The Magic Knight is a recurring Human class in Disgaea 2: Cursed Memories and its remake, Disgaea 2: Dark Hero Days.

They are unlocked by passing the "Make a Busty Beauty" bill in the Dark Assembly, which requires a level 3 Sword and Staff Mastery (does not have to be on the same character).

Their Special Ability allows them to have +25% elemental damage; Lover specialists increase this by +1% per Lover level.

Magic Knights are similar to the Kunoichi in that they are a mixture of a physical and magical attacker. However, this makes them mediocre stat-wise. Their SPD Aptitude is also very low, thus, a Magic Knight will not be in the party for her evasion power. Despite this setback, Magic Knights have potential to be the game's most powerful class damage-wise as they have skills which can increase or decrease Elemental resistances, effectively making their Magic stronger. This trick can be greatly utilized to an unfair effect in the Post-Game by giving them a Rank 40 Staff, having INT-perfected Rank 40 Accessories, having 25 Magic Knight Lovers, and 100 Professionals, then maximizing its Mastery to 255 and the level of the spell (preferably the "Tera" or "Peta" tier spell of the element you are using) to 99. Once this is done, they can increase their Elemental Resistances whilst in battle, then decrease their enemy's resistance the same way, then cast the spell of the strengthened element, causing apocalyptic damage to the helpless enemy. Magic Knights can easily deal over 1 billion damage more than other classes. Note that this trick is best used with only Elemental Magic. Star Magic cannot be modified in this way.

The range of spells is dependent on Staff mastery and skill level. 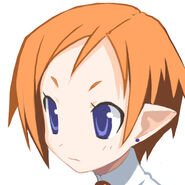 250px|Magic Knight - Disgaea 2
Add a photo to this gallery
Retrieved from "https://disgaea.fandom.com/wiki/Magic_Knight_(Disgaea_2)?oldid=45688"
Community content is available under CC-BY-SA unless otherwise noted.