The Mage is a class in Disgaea 3: Absence of Justice. Retaining her design from Disgaea 2: Cursed Memories, the Mage appears as a young girl with long hair, a frilly dress, and a bow tied in her hair. She isn't made at all for physical combat and is instead used to attack foes from far away using her magic attacks. Her native Evility, Magic Moderation, lets her use Special Techniques (such as magic) while using up less SP to do so. She is unlike most other classes because she has her first three tiers unlocked at the beginning of the game, each handling a different element of magic. It is known that the bow tied in her hair absorbs magic from the air, explaining her ability. 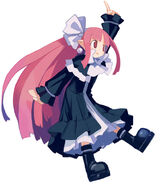 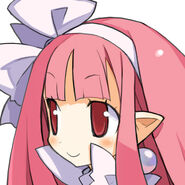 Mage's Cut-In Image
Add a photo to this gallery

Retrieved from "https://disgaea.fandom.com/wiki/Mage_(Disgaea_3)?oldid=47863"
Community content is available under CC-BY-SA unless otherwise noted.