This is a list of the various endings and their requirements in Disgaea: Hour of Darkness.

This ending is obtained by having no ally kills in that cycle, and is generally considered to be the canon ending. Laharl defeats Lamington, but refrains from killing the helpless angel. He begins gathering power to sacrifice his life for Flonne, but is stopped by Vyers. He then informs Laharl that the Seraph and he had planned everything as an attempt to reconcile the two worlds of Celestia and the Netherworld. Before their eyes, Flonne is revived as a Fallen Angel: her punishment for her actions. Vyers also reveals that the Seraph had willingly entered battle with Laharl as his own punishment for manipulating them. As he speaks, Vyers begins to fade out and Laharl's Mother appears next to him. Laharl, wondering how Vyers knows all these things, asks him who he really is, to which Vyers replies he already told him, that he is the Dark Adonis. He congratulates Laharl and disappears along with Laharl's Mother (Big Sis Prinny), implying that he is King Krichevskoy. The credits roll, showing the fates of Laharl and his companions: Laharl is finally recognized as the Overlord, Etna returns to commanding her Prinny squad along with Aramis, Flonne becomes a teacher, Gordon and Jennifer return to Earth with a new movie, Kurtis seemingly passes on at the Red Moon, and peaceful relations have been established between Celestia and the Netherworld by Laharl and Lamington. The song "Flower of Happiness" plays. 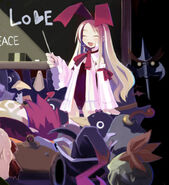 This ending will occur if at least one Ally Kill is made. The scene begins with the Seraph lying in a pool of blood, with Laharl panting from exertion. Vyers appears and explains his and the Seraph's plans to bring peace between the Netherworld and Celestia, and that the Seraph had planned to return Flonne to normal if Laharl spared him, thereby showing personal growth. Horrified, Laharl realises that his actions have doomed Flonne to existence as a flower. He asks Etna to rule the Netherworld for him, and sacrifices his life to save Flonne's.

However, after the credits roll, Etna and Flonne's voices are heard, discussing a new Prinny who refuses to work. The scene ends with them noticing the Prinny's strange yet familiar features, implying that Laharl has returned as a Prinny. "Flower of Happiness" again plays in this ending.

The player must pass 100 Bills by force and have at least one Ally Kill. The Seraph is killed by Laharl, and Flonne remains a flower. Laharl picks the flower up, and disappears into the darkness, hoping to find a way to return Flonne. A screen tells the player that he is never seen again.

The player must kill an Item God in a Legendary item and have at least one Ally Kill. The scene is similar to the Normal ending, but Vyers appears and informs Laharl that the Seraph is alive. Flonne returns as a Fallen Angel, but Laharl is so horrified by his behaviour that he entrusts the throne to Etna, saying that he will go on a journey and mature before he resumes the title of Overlord. Laharl walks away, and the game ends with Flonne hoping that they will meet again someday, and live together in peace. The song "Tragic Marionette" plays.

The player must achieve more than 50 Ally Kills before the last stage of chapter 3. When given the choice to kill Hoggmeiser, select "yes". This causes Flonne to sacrifice her life in an attempt to save Hoggmeiser. The song "Tragic Marionette" plays over a background of angel feathers.

Obtain at least 100 Ally Kills before the final map in the fifth episode, and choose to kill Maderas. Flonne attempts to stop Etna, who kills her and then begins plotting to kill Laharl. The song "Etna Boogie" plays as the credits roll.

Pass the "Human World" bill in the Dark Assembly and complete all the maps. Laharl declares himself the ruler of Earth, to the horror of Jennifer and Gordon. When Flonne reminds Laharl that they were heading to Celestia, he decides to go forth and conquer it as well. The song "Lord Laharl's Hymn" plays as the credits roll, with a picture of Laharl standing triumphant on the Earth.

Lose to Vyers in any battle (all 10 characters must be killed). Mid-Boss is astonished at his easy win, and then begins celebrating his victory. The song "Ah, My Magnificant Life" plays.

Defeat the game normally in Etna Mode. Vyers advises Etna to visit the Stellar Graveyard, where they find a revived Laharl.

Retrieved from "https://disgaea.fandom.com/wiki/List_of_Disgaea_Endings?oldid=35786"
Community content is available under CC-BY-SA unless otherwise noted.