Kyoko Needleworker is a character in Disgaea 3: Absence of Justice.

Kyoko is a skilled Ninja Delinquent who works alongside Raspberyl and Asuka Cranekick. She follows Raspberyl everywhere and calls her "My Lady". Kyoko's name comes from the fact that she loves to do needlework, often making things like scarves. Like Raspberyl and Asuka, she partakes in Delinquent activities such as donating blood and cleaning up trash.

Gameplay-wise, she is basically a pink recolor of the Kunoichi class, just with different Evilities. Unlike most main characters, Kyoko only has one unique skill, called Lily Elegy. However, another technique can be unlocked in Raspberyl Mode; called Detective Double, which references her name in the Japanese version, the attack consists of Kyoko summoning a duplicate of herself and wrapping the enemy up in yarn.

Kyoko, along with Asuka, are a one-pack DLC in Disgaea 4: A Promise Unforgotten. Their purchase also unlocks the Kunoichi class.

Asuka appears as an obtainable character. 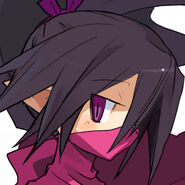