Kunoichi is one of the human classes in Disgaea 2: Cursed Memories and Disgaea 2: Dark Hero Days.

She is unlocked by passing the "Make a Kunoichi" proposal in the Dark Assembly, which requires a level 5 Fist and Staff Mastery (does not have to be on the same character).

Their Special Ability allows them to have a 50% chance to double attack when their HP decreases to below 25%; Lover specialists increase this by +1% per 2 Lover levels.

Kunoichi specialize in status ailments, making them very useful for putting enemies to sleep or poisoning them. As far as fighting goes, they can tilt towards either physical (Fist or Sword) or Magical (Staff or purely Status Ailments) styles. They lack the evasiveness that the Male Ninja has, but they can attack twice (with any type of attack) when in danger. This is fine against enemies that just need that last hit to go down. However, since Kunoichi have a mix of ATK, SPD, and INT power, they lack a specialty in any particular statistic, making their stats somewhat mediocre compared to certain other characters, such as Samurai or Majins.

Although their strengths are lower than their male counterparts, no one can match their speed. They are mainly used as guards for royalty. 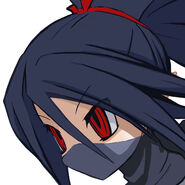 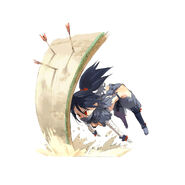 A Bonus Gauge image of the Kunoichi

Kunoichi - Disgaea 2
Add a photo to this gallery
Retrieved from "https://disgaea.fandom.com/wiki/Kunoichi_(Disgaea_2)?oldid=45690"
Community content is available under CC-BY-SA unless otherwise noted.