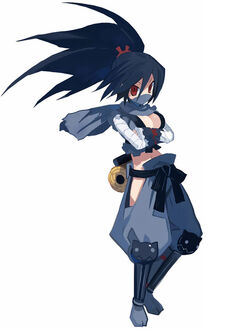 The Kunoichi is a recurring humanoid class in the Disgaea series first introduced in Disgaea 2: Cursed Memories.

Kunoichis are beautiful assassins with murderous intent, who use their looks to seduce their targets. Kunoichi are not as strong as Ninjas, but make up for it with unrivaled speed, comparable to a black panther. Kunoichis are also very loyal and often serve as guards to royalty. Kunoichis secretly admire cute clothing, in part due to being forced to wear a plain uniform.

The Kunoichi is unlocked by having a unit with five Fist and Staff mastery. Their special ability allows them a 50% chance to have an extra attack while their HP is critical.

Kunoichi are unlocked by having both a level 30 Fight Mistress and Mage. The Kunoichi's primary Evility, "Flame Haze" allows them to have a 50% evasion rate when dodging skills that hit multiple spaces.

The Kunoichi is a downloadable class in Disgaea 4. They are unlocked by purchasing the Kyoko and Asuka DLC pack and defeating them on the DLC fight. They are similar to their Disgaea 3 counterparts, retaining the "Flame Haze" Evility and Weapon Forte. They can learn secondary Evilities that can boost their damage output such as increasing critical hit damage by 100% or attack power if attacking enemies multiple times.

The Kunoichi returns in Disgaea 5. again as a DLC class.

Retrieved from "https://disgaea.fandom.com/wiki/Kunoichi?oldid=45989"
Community content is available under CC-BY-SA unless otherwise noted.