The Knight is a class in Disgaea: Hour of Darkness and its remakes. Knights focus on both dealing physical damage and using elemental magic, and thus can wield swords and staves equally skillfully. When a Knight uses the Attack command, she has a chance to follow up the attack with a random learned offensive spell.

Having two overlying proficiencies, her overall stat Aptitudes and growth are slightly lower than most classes, making her best used as a support or follow-up attacker.

Also, when Transmigrating this class, there is a chance that they will learn a new set of elemental spells upon completing the process. Thus with subsequent Transmigrations, the Knight can learn all Elemental spells up to Omega level. Healing and Star-element spells must still be Pupil-taught, however.

A level 100 Knight is one of the requirements to unlock the Celestial Host.

Only one demon in a hundred can become a rune knight, a special breed of soldier capable of wielding both magic and swords. It's said that they can see the future using a power called the "Zone." Although they are demons, they have a strong sense of loyalty and will die if they break a sword oath.

Spell Ranges are dependent on Staff mastery and skill level.

Note: Knights may only learn one set of elemental spells at a time (not including spells learned from pupils, or kept from transmigration). 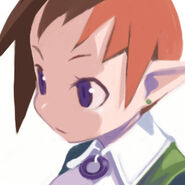 Knight's Cut-In Image
Add a photo to this gallery
Retrieved from "https://disgaea.fandom.com/wiki/Knight?oldid=41129"
Community content is available under CC-BY-SA unless otherwise noted.