The Kit Cat is a class from Disgaea: Hour of Darkness. Kit Cats are one of the only two monster class demons in Hour of Darkness to have a confirmed female gender, the other being the Succubus. They first appear in Chapter 5 with some Succubi after Maderas learns of Laharl's weakness to sexy bodies. He takes advantage of this and gets them to fight Laharl. They fight with martial arts, and have a high speed and attack, as well as a good amount of counters.

“Legends say cats lived for a very long time demonized and became Kit Cats. They are a clan of tomboys who are skilled in Martial Arts. Their cat ears have gained them many fans throughout the Netherworld. Just don't try to pet them too hard.”
—Kit Cat profile. 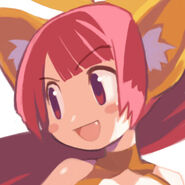 Kit Cat's Concept Art
Add a photo to this gallery
Retrieved from "https://disgaea.fandom.com/wiki/Kit_Cat?oldid=46183"
Community content is available under CC-BY-SA unless otherwise noted.