Grant George
King Krichevskoy is a recurring character in the Disgaea series, first appearing in Disgaea: Hour of Darkness series, and later returning as a DLC character in Disgaea 4: A Promise Unforgotten. He is the late ruler of the Netherworld and Laharl's father.

Krichevskoy dies two years before the events of Hour of Darkness, after choking on a black pretzel (dark manju in the Japanese version, Dumpling of the Damned in the anime), putting the Netherworld into a time of anarchy as other demons rose to challenge each other for the throne. Most of his vassals, including Hoggmeiser, leave during this period, though some remain at the the castle.

Krichevskoy, like Lamington, believed that every being had love in their hearts. Etna, who was loyal to him, found this unusual for an Overlord. Before his death, Krichevskoy asked Laharl if he loved him, to which Laharl replies that he hates him. Krichevskoy responds by saying that one day Laharl will warm up to him.

Though Etna initially tells Flonne that he died choking on a black pretzel[1], after defeating Baal, a mysterious voice (implied to be Krichevskoy himself) tells Laharl that Krichevskoy died after sealing Baal away, exhausting all of his power.

It is heavily implied that Vyers is King Krichevskoy throughout the game. In the World of Disgaea artbook, Vyers is referred to as Krichevskoy's "reincarnation". At the end of the Disgaea: Hour of Darkness manga, Vyers mentions to Seraph Lamington that Laharl is "quite a dutiful son."

Krichevskoy appears as a playable character in Disgaea 4: A Promise Unforgotten. He is a DLC character acquired through the "Netherbattle Tournament". In this game, he takes on a younger form than his previous appearance, thus appearing similar to Vyers.

The Netherbattle Tournament was created by Krichevskoy when he saw how the quality of demons declined and decided to appeal to Seraph Lamington in order to be brought back to life. He appears in the final round of the Netherbattle Tournament, questioning if anybody could defeat him and creates 3 clones of himself. He is fought inside the Overlord's Castle throne room and his levels will vary depending on which level the player chose to play the Netherbattle on. After being defeated, the scene changes to the Hades Party celebrating their win and Krichevskoy decides to hand control of the Netherworld to Valvatorez as the grand prize. Valvatorez declines, saying he must whip demons back into their proper shape instead of using a tournament to do so. He is recruited afterwards. 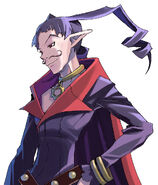 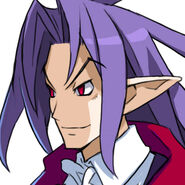 Krichevskoy's in game sprite in Disgaea 4: A Promise Unforgotten

Concept Art for King Krichevskoy from Disgaea: Hour of Darkness.

Concept Art of King Krichevskoy from Disgaea 4: A Promise Unforgotten.