With every hero comes a sidekick that makes up for the hero's flaws. Jennifer fulfills the role as Captain Gordon's beautiful sidekick.

She accompanies Gordon on his mission to defeat the Overlord and prevent his alleged invasion of Earth. She is revealed as the adopted daughter of General Carter, who has used her like a puppet many times, and intends to do so again. She is captured by Kurtis and held aboard the Battleship Gargantua, mind-controlled by Carter to attack Gordon by episodes' end. However, Kurtis has a change of heart and destroys the mind control device, freeing Jennifer and foiling Carter's plans

She returns alongside Gordon and Thursday to help Kurtis against his clones in Disgaea 2.

Thursday transforms into his flying saucer mode, and Jennifer shoots him into the sky. Kurtis and Gordon add their velocity to Thursday, and the trio fly straight into the group of Kurtis clones. All but four of the clones have been destroyed when the screen returns to normal. However, she and Thursday are knocked out, and thus unable to aid more Gordon, Kurtis, Adell, and Rozalin.

Also in the PSP remake Dark Hero Days, she was one of the scientists, along with Rasho the Prinny Chief, Mao, Marjoly, Overlord Priere, Aramis and Zetta, who created the super robot Pringer X Go! being the head enginer on the project.

She returns in Disgaea 3 as part of a DLC that includes Gordon and Thursday. In it, she attempts to become a science teacher at Evil Academy. Mao asks her what sort of qualifications she has, leading her to answer Mao's complex questions in seconds. Mao then retorts by saying all Science Teacher positions are full (even though they aren't). Jennifer then decides to fight the group and show her other skill, Kung-Fu. After being defeated, Jennifer decides to leave but Mao stops her and hires her as a teacher (while planning to do experiments on her, like always).

In battle, Jennifer can Magichange into a Fist Weapon (which looks like a Mecha version of her head).

Jennifer is a rather sexy woman (much to Laharl's dismay) and often jokes around in a very flirtatious manner. In the anime, her breasts would often bounce whenever Laharl would take notice. She was also afraid of the Netherworld once, thinking that demons were nothing but monsters that would hurt innocent people, especially women and children, until she saw the child-like appearances of Laharl and Etna. Despite her appearance, however, her intelligence and technical knowledge surpasses most scientists. In fact, she was the one who created the All-Purpose Robot Thursday at age five and even earned her Ph. D at age ten. She is also skilled at martial arts, especifically kung fu - a skill now extinct on earth. Of all the characters in the game, she is the one who supports Gordon the most. 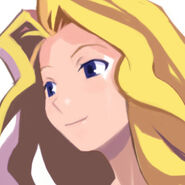 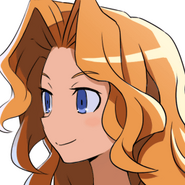 Full-body artwork of Jennifer from Disgaea RPG.
Add a photo to this gallery
Retrieved from "https://disgaea.fandom.com/wiki/Jennifer?oldid=47746"
Community content is available under CC-BY-SA unless otherwise noted.