Hugo, also known as Netherworld President Hugo and Death King Hugo, the 61st President of the Netherworld and father to Emizel, as well one of the major antagonists in Disgaea 4: A Promise Unforgotten.

He makes a few short appearances in episodes 2 to 6, hearing a report from Psylos of the Three Brutes on what troubles are going on in the Netherworld and the news on the rebels going against the Corrupterment.

He appears before Valvatorez and his party at the end of episode 7, stating he was surprised to hear Valvatorez was the leader of the rebels and asks him why he formed a rival party only to hear him answer that he would have continued his new job as a Prinny Instructor if he never sent out the Prinny execution order. Hugo is then questioned by Valvatorez on why he is letting the human world get out of control. Before he answers he asks the rest of the party why they came to overthrow the Corrupterment, only to laugh when he sees how divided their goals are. Hugo is surprised again when he hears Valvatorez, a demon who lived life alone as a Tyrant and refused the help of others, talk about a camaraderie and declares that he will judge if Valvatorez's change through sardines and the promise he made 400 years ago is an evolution or degeneration, triggering the battle. After his defeat, he revealed that all of his actions were to hide the deal he made with the Human World due to the decline of fear energy in the Netherworld. He explains that they tried hard to find ways to scare the humans, but they advanced much faster and because of their own actions (wars, terrorism, weapons of mass destruction caused by human error and daily incidents of murder) they have begun to fear themselves and kept the fear energy in the human world, this causing the decline of Fear Energy. It is because of this decline that both Hugo and the demons of the Corruptment had weakened in power, since demons become weaker when there is less fear energy in the Netherworld and the Corruptment is affected by this the most. He also reveals that the Netherworld was being controlled by the secret ruler of the Human World, a man named Judge Nemo.

Hugo appears again in episode 9, where he contacts the group on how the Information Bureau helped spread how Valvatorez's party was trying to stop the destruction of the moon, causing them to pray and create awe energy for Great Flonzor X. He also states how strong Emizel has become and says how proud he is of him.

Before the party's battle with Hugo, it is revealed that he fought with Valvatorez a long time ago back when Vavatorez was still known as a Tyrant. Valvatorez states that they fought for days on end and were unable to settle their match. Hugo mentions that Valvatorez was the only demon able to cause an injury on his body.

In battle, Hugo has the Netherworld President enemy class. He fights very much like a Reaper class character, only with much higher stats. He has high SP, followed by ATK, INT and Hit. He has the Reaper's Mind Killer Evility (which deals 50% of the damage he deals to his target's SP) and his unique Protection Target Evility, which increases that stats of his Bouncers by 30%. His only skill is Keeper of the Abyss (the same final skill Reapers have), which deals star damage and inflicts Deprave.

Hugo joins the player's party after the opening scene of the third chapter of the Fuka and Desco scenario. He has his same skills as he did in his boss battle (plus the other three Reaper skills) and has the same Evilities as Reapers plus his own new unique Evility that allows him to have a 10% chance to inflict deathblow when casting spells. He Magichanges into a bow with the Reaper's Magichange skills. 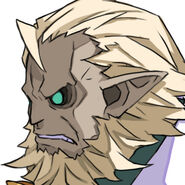 Hugo's Cut-in.
Add a photo to this gallery

Retrieved from "https://disgaea.fandom.com/wiki/Hugo?oldid=47788"
Community content is available under CC-BY-SA unless otherwise noted.