The Horseman is a class introduced in Disgaea 5: Alliance of Vengeance. Brought back from the dead to fight again, he thirsts for battle and will fight for his allies without hesitation. His skeletal body is strong against physical attacks. He is very functionally similar to the Dragon Zombie or Skeletal Dragon from previous Disgaea games, even inheriting some generic Evilities from the Disgaea 4 variant of that class.

“A knight who charges forward with his solid armor.”
—Short in-game description

“Only the best knights can ride Bone Dragons. They are skilled in the art of swords, and can demolish anything with one swing. They are feared by other monster races. They are chivalrous in combat, which is rare for demons. They get along well with Samurais.”
—In-game description 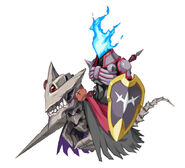 Horseman's sprite
Add a photo to this gallery

Retrieved from "https://disgaea.fandom.com/wiki/Horseman?oldid=43028"
Community content is available under CC-BY-SA unless otherwise noted.