The Holy Dragon is a monster class in Disgaea 3: Absence of Justice. They are a breed of Dragon known for their angelic appearance.

Retaining its design from Disgaea 2: Cursed Memories, the Holy Dragon is a white Dragon with feathery wings, gold bangles on all four legs and both horns. It is unclear whether the Holy Dragons are Demons with a strong sense of Justice or Dragons from Celestia. Either way, the Holy Dragon has access to several magical powers. For some reason, it can use Ice Magic and most of its skills use the Ice Element. They like to fly high above foes when they fight (as shown with their native Evility, Heaven's Blessing, which gives them more power while they are on high elevations).

A heavenly dragon that controls wind.Gains more powers the higher it goes. 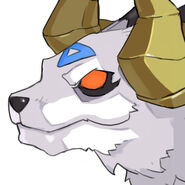 Holy Dragon's Cut-In Image
Add a photo to this gallery
Retrieved from "https://disgaea.fandom.com/wiki/Holy_Dragon_(Disgaea_3)?oldid=41023"
Community content is available under CC-BY-SA unless otherwise noted.