Josh Grelle
Hoggmeiser is a character from Disgaea: Hour of Darkness and its remakes. His class is related to the Nether Noble monster class. A former butler to King Krichevskoy, after the King's death, Hoggmeiser gathered up a vast sum of the King's wealth and built his own castle with it, creating a barrier to keep intruders out.

At first, Hoggmeiser intended to become the Overlord, but he was more attached to money than the title and, apparently, his son. After the battle at the end of chapter 3, just as Laharl was about put an end to him, Hoggmeiser's son, Porkmeister, intervened and prevented this from happening. His son was upset at him for being obsessed with money and the title of Overlord.

Laharl, after some persuasion from Flonne, allows Hoggmeiser to live. Touched by Laharl's kindness, he joins the player's party without consent.

Alternately, if 50 allies were killed, Laharl can choose to kill Hoggmeiser, which causes Flonne to intervene. This ending causes Lamington to remark that his plan has ended.

In the remakes' Etna Mode, Hoggmeiser's role is exactly the same as in Hour of Darkness. Instead of a kind moment after the battle, however, Etna ties up Hoggmeiser and his son remarking that she will not separate the two, yet they will be her slaves. Therefore, Hoggmeiser will again join without consent. Flonne watches from the sidelines, determined to show Etna the true way of being a Space Detective (Which she thought Etna was at the time.)

Hoggmeiser is a greedy and forgetful demon, but he shows a thread of good will when Laharl spares his life. He is also shown to be extremely proud of his son Porkmeiser, who is much braver than he is. (As remarked by both Laharl and Etna in their respective modes.) 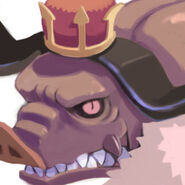 Hoggmeiser portrait from Disgaea: Hour of Darkness
Add a photo to this gallery
Retrieved from "https://disgaea.fandom.com/wiki/Hoggmeiser?oldid=49349"
Community content is available under CC-BY-SA unless otherwise noted.