“The END!”
—Heavy Knight, Disgaea 3 The Heavy Knight is a class in Disgaea 3: Absence of Justice. Retaining his design from Disgaea 2: Cursed Memories, he is exactly what his name implies, a gigantic behemoth in heavy armor. As such, his movement is poor but his defensive stats are off the charts, meaning he can take the bulk of most physical attacks with little harm. Players often equip Heavy Knights with Spears to increase their Defense and their attack range (which helps with their low movement). Heavy Knights are also decent with Axes. The Heavy Knight's native Evility, Aegis, decreases the damage received from the front. 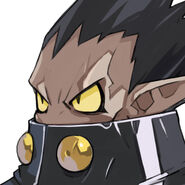 Heavy Knight's Cut-In Image
Add a photo to this gallery

Retrieved from "https://disgaea.fandom.com/wiki/Heavy_Knight_(Disgaea_3)?oldid=45250"
Community content is available under CC-BY-SA unless otherwise noted.