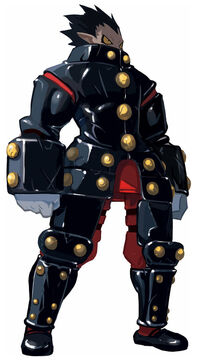 The Heavy Knight is a recurring humanoid class in the Disgaea series, first introduced in Disgaea 2: Cursed Memories.

They are graduates from the Knight Academy, which trains knights who protect the royal families. Boys enter the academy when they're young and learn the required skills, manners, and courage to be a knight. They are rewarded for their training with a special suit of armor.

Heavy Knights are characterized by their low movement, but very high defensive power. They also boast the highest throwing range of all classes as well.

The Heavy Knight class is introduced in Disgaea 2 and is unlocked by having a character with 5 Spear Mastery, then passing the associated bill in the Dark Assembly. They have low movement and jump, but boast one of the highest HP and defence stats in the game, with their defence going up when their HP hits critical, as well as having the farthest throwing radius in the game. They excel at using Spears.

The Heavy Knight is unlocked by having both a level 15 Warrior and a level 15 Martial Artist. His Native Evility makes it so he automatically Defends when receiving attacks from the front.

The Heavy Knight retains the same function as in previous games, and is unlocked by having a level 20 Warrior.

Concept artwork of the Heavy Knight.
Add a photo to this gallery
Retrieved from "https://disgaea.fandom.com/wiki/Heavy_Knight?oldid=46102"
Community content is available under CC-BY-SA unless otherwise noted.