The Gunner is a Humanoid class in Disgaea 2: Cursed Memories and its remake.

The Gunner is unlocked by passing the "Make a Sunset Kind of Guy" bill in the Dark Assembly, which requires a character to have level 5 Gun Mastery.

Their Special Ability allows them to have an extra +20% damage in combo attacks; Lover specialists increase this by +1% per 2 Lover levels.

Gunners are long-ranged equivalents of the Samurai. However, they can only use Guns, since they lack the stats or Mastery ability to wield anything else other than Bows (which they aren't very good with). Like most ranged attackers, they suffer from low HP and DEF, so take this into account. Their special ability, increased Combo (No Team Attacks) damage is pretty useful when fighting a singular powerful enemy. Due to their ability, they are best used as support for other characters, since they aren't the strongest when going it solo. 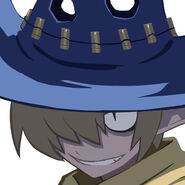 Gunner - Disgaea 2
Add a photo to this gallery
Retrieved from "https://disgaea.fandom.com/wiki/Gunner_(Disgaea_2)?oldid=45689"
Community content is available under CC-BY-SA unless otherwise noted.