The Great Wyrm is a class that appears in Disgaea: Hour of Darkness and its ports.

They have high stats for a Monster Class and is similar to the Dragon class, having skills whose elements are different for each tier. The Great Wyrm's special attacks have very large area of effects (the first skill has a 3x3 AoE), making them great for attacking large groups of enemies.

The player's first encounter with a Great Wyrm will be when they encounter the Alt Overlord in Episode 6. However, he is not a "true" Great Wyrm, having the unique "Alt Overlord" class instead, and even if you manage to defeat him without the help of Krichevskoy's Vassals, you will not unlock the Great Wyrm class.

Great Wyrms are notable in that, aside from the Alt Overlord (who, again, is not a "true" Great Wyrm), they are one of two monster classes that never appear during the story (the other being the Nether Noble). Theyare only found in ultra-high-level optional areas, or the Dark Assembly and the Item World.

These are the strongest of all dragons. There are few of them left in the Netherworld, so little is known about these monsters, other than they have impervious skin and massive claws that can rip anything to shreds. Challenging them is literally suicide.

The Great Wyrms have the same 'set' of attacks, but each tier of Wyrm has a different elemental affinity. Efreet and Kagusutchi add fire to their attacks (So the Effect column would read not just 'ATK' but 'Atk/Fire'), and their attacks start with the word Fiery; Shaitan, wind element and Raging prefix; Marid, ice element and Frigid prefix; Flamberg, no element and Astral prefix; Surt, no element and Diabolic prefix. 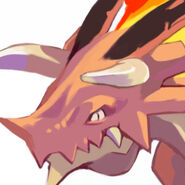 Great Wyrm's Concept Art
Add a photo to this gallery
Retrieved from "https://disgaea.fandom.com/wiki/Great_Wyrm_(Disgaea)?oldid=45618"
Community content is available under CC-BY-SA unless otherwise noted.