The Golem is a Monster class in Disgaea: Hour of Darkness and its ports.

Golems have high HP, making them sturdy units. This, combined with their high attack stat, makes them good candidates if you're in need of some extra power on the battlefield.

As enemies, you should be wary of their high attack combined with their counter ability. Characters with low defense would be wise to use ranged attacks when facing enemy Golems in battle.

Golems are monsters formed from highly pressurized gasses in the Netherworld. Higher level golems possess extremely dense bodies and can level mountains with a single strike. However, they tend to be peaceful in nature, unlike most demons of the Netherworld. Beware their murderous temper, though. 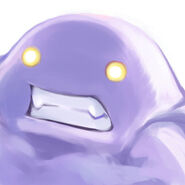 Golem's Concept Art
Add a photo to this gallery
Retrieved from "https://disgaea.fandom.com/wiki/Golem_(Disgaea)?oldid=45636"
Community content is available under CC-BY-SA unless otherwise noted.