The Geomancer is a class in Disgaea 3: Absence of Justice.

Retaining his design from Disgaea 2: Cursed Memories, the Geomancer is an old demon with blank eyes, giant eyebrows, a beard and long grey hair on the back of his head. He wears gold braclets, anklets, earrings and wears monk style shorts and a scarf in an X style fashion. He also has a jewel (called a Geo Crystal) embedded into his head and can float while assuming a cross legged meditation position. A Master of the Geo arts, the Geomancer can rearrange the Geo Panel Layout while in the Item World. He can use a Staff weapon which compliments his ability to use Star and healing magic. The Geomancer is also decent with Fist weapons. The Geomancer's native Evility, Geo Energy, increases his stats by 10% for every Geo Block Color on the Map. 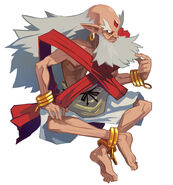 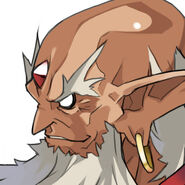 Geomancer's Cut-In Image
Add a photo to this gallery

Retrieved from "https://disgaea.fandom.com/wiki/Geomancer_(Disgaea_3)?oldid=35476"
Community content is available under CC-BY-SA unless otherwise noted.