The Galactic Demon is a monster class seen only in Disgaea: Hour of Darkness and its ports.

The Galactic Demon is unique in that while most of its aptitudes are 100% like the average Disgaea: HOD monster, its aptitudes in both Defense and Resistance are at 150%. It can only move two spaces per turn, which is rather low. However, this can be easily remedied by equipping it with Shoes, which increase movement.

It should be noted that Galactic Demons have the highest creation cost out of all the monsters in Disgaea: Hour of Darkness. While this means that the cost to create one will be incredibly high for the player, the Experience that an enemy Galactic Demon gives when killed is much higher than that of any other monster.

It's also worth noting that, in Disgaea: Afternoon of Darkness and all subsequent ports, a new area called Demonhall Mirror was added, and the last two tiers of the Galactic Demon class were made to appear there. This means that Galactic Demons are the only class aside from Prinnies where all tiers can be found outside of the Dark Assembly and the Item World.

The Galactic Demon was replaced with Rifle Demon class in Disgaea 1 Complete.

Born from the eternal blackness of the galactic abyss, these demons are slow-witted and sluggish. They were first discovered in the Stellar Graveyard. They won't go out of their way to battle, but their electric powers and durability are feared throughout the Netherworld. 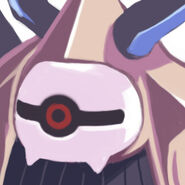 Galactic Demon's Cut-In Image
Add a photo to this gallery
Retrieved from "https://disgaea.fandom.com/wiki/Galactic_Demon?oldid=46092"
Community content is available under CC-BY-SA unless otherwise noted.