“This is war! A war to rid my dream of all demons and make it more fantastical and girly! A battle for freedom and youth!”
—Fuka Kazamatsuri, Disgaea 4: A Promise Unforgotten

Fuka Kazamatsuri is a character from Disgaea 4: A Promise Unforgotten. She is a middle schooler who was killed and was meant to turn into a Prinny, but was simply given a hat and a jacket due to the lack of [Prinny hides. She insists that everything that is happening is just a dream and thus nothing she encounters is real. Her denial enables her to use much more latent power than other humans can do consciously, allowing her to fight on par with demons.

Fuka is a stubborn, selfish, and immature individual that stubbornly believes her death is a dream and constantly presents oxymorons that only benefit her. Although she typically acts like a tomboy, she has multiple feminine interests (sweets, flowers, boys, etc.) and has an intense fascination with romance. Her interactions with Desco reveal that Fuka has a kind and loving side to her, having accepted her younger sister long before her origins were confirmed. Fuka forms a friendship with Vulcanus and the both of them, along with Desco, create a gossip circle that scares Emizel. Due to her stubborn belief that she's only dreaming, Fuka shows very little fear in the face of even the most powerful demons. She does consider the possibility of her death at one point in the story but later goes back into thinking it is dream. In her special ending, she admits that she has somewhat of a crush on Valvatorez, but doesn't want to break the "friendship rule" and risk making things complicated with Artina and Fenrich.

Originally, Fuka had a strained relationship with her father, Genjuro, believing him to have thrown himself into his work to escape his wife's death and completely disregarding her own feelings. Upon learning how her father spent the past 2 years developing Desco and Des X to fulfill Fuka's wish of having a younger sister (with advanced functionality to help her take over the world), she appears to have mended her relationship with Genjuro (although his eccentric personality tends to annoy and embarrass her).

Fuka is first seen at the very end of Episode 1, when she declares war on the Prinnies in Hades being trained by Valvatorez she then prompts Valvatorez to follow her. From this point on Fenrich treats her with disgust, thinking she is just a foolish human.

In Chapter 2, Fuka reveals that she waited an entire night because she does not want to be late for her "war" with Valvatorez. When Valvatorez gets there Fuka mentions that she wants a happier dream and in order for that to happen she needs to kill them and the Prinnies which marks the beginning of Prinny War 1. Before Chapter 2-2, Valvatorez talks to her again and she directly states her belief that everything is a dream; thoroughly confusing Valvatorez. In the next battle she reveals her almighty secret weapon... Emizel! Fuka believed that since he is the son of the president he must be strong, though Emizel is quickly defeated by Valvatorez's party. Afterwards, Fuka decides to fight the party herself thinking that she can't lose to them in her dream. When she is defeated, she wonders how could she lose before stating to Valvatorez that she did not want to be in her "nightmare" any longer. Valvatorez questions her on what "nightmare" she is talking about and Fuka explains the harsh 20 hour work days of a Prinny while telling him the hobbies she missed in her human life.

Valvatorez explains that is how Prinnies live and with Fuka refusing to accept it, she runs away to a heavily polluted area filled with mutated demons. Fenrich decides not to go after her but Valvatorez states that it is his duty as a Prinny Instructor and goes after her. When they catch up to her, she is surrounded by Giant Slimes. While Valvatorez is shocked at the amount of pollution the humans have dumped into the Netherworld, Fuka escapes from the Slimes and asks them if they really did came to rescue her. He confirms it and Fuka joins the party and fights the mutated demons. After defeating the demons, Valvatorez states that Fuka must now undergo the process of becoming a Prinny. She refuses to do so and wants to change the Prinny Law and make better working conditions for Prinnies. Valvatorez tells her that only the President can do so and Fuka is motivated to become the next President with Valvatorez promising her to take her to the President.

In Episode 3, Fuka follows Valvatorez around when he is trying to quell the prison break in Hades. At the Forbidden Cell, when Desco appears, Fuka states that she is the monster her attacked her and put her in the nightmare. Desco wants to impress Fuka so she fights Valvatorez's party. After she is defeated, Desco tells Fuka that she is her big sister and was created by her father. She refuses to accept it knowing that she is an only child and would not have a "gross sister".

In Episode 4, Fuka upsets Desco when she refuses to acknowledge her as her little sister. Valvatorez breaks up the fight stating that they must get along no matter their differences. Fuka agrees and tells Desco that she will accept her as her little sister only if Desco follows her every command and acts more girly. They go to the Information Bureau where Emizel is not recognized by the workers to be alive. Fuka and Desco relate to Emizel and both feel abandoned by their father.

The Fuka and Desco ShowEdit

Both Fuka and Desco star in a DLC Scenario called The Fuka and Desco Show. It details how Fuka is attempting to reincarnate for her sins with Desco trying to cope with her sister's decision. Desco, along with Vulcanus, helps Fuka steal money from the Netherworld Mint to pay for her sins. Fuka thinks that if she obtains a "jillion HL", not only will she will be able to pay for her sins, but she will also be able to bribe Death and have one wish fulfilled. Desco is worried that Fuka will wish for world domination and render her purpose useless. Fuka later comforts Desco, saying that her wish isn't for world domination.

Fuka also tells Desco that she'll always be her baby sister. After raiding the Mint, Fuka learns that she will lose all of her memories if she reincarnates, making Desco worry even more. Valvatorez decides to intervene and tells Fuka that she cannot reincarnate if she doesn't become a Prinny. Fuka is confident that she can overrule Valvatorez's reeducation and live as herself. Fuka goes through the Zettai Prinny Project, a reeducation course and manages to defeat all of the instructors. Valvatorez and Fenrich decide to fight Fuka as the final part of the course, but Fuka manages to defeat both of them. Valvatorez decides to let Fuka continue her existence as part of a promise he made to her earlier. However, Fuka still wants to reincarnate, leaving Desco in shock and splitting into two because of her uncontrollable emotions.

This led to the creation of Torn Desco who seeked to turn the Blight House into Big Sis Loveland, hoping to attract Fuka there. Fuka decides to stop Torn Desco as she plans to revise the Prinny Law to prevent her from reincarnate. When the party arrives at Big Sis Loveland, Fuka sees multiple things she loves such as flowers  and sweets that Torn Desco tries to attract her with.  As Fuka denies Torn Desco's offerings, Desco starts to come to terms with her sister's decision. At the President's Office, Torn Desco wonders why Fuka isn't interested in Big Sis Loveland. Fuka tells Torn Desco that she will reincarnate no matter what, making Torn Desco to call her stupid. The real Desco stands up for Fuka, stating as a final boss, she'll accept Fuka's decision. Torn Desco is defeated, learning why Fuka does not want to remain in the Netherworld. She fuses back into Desco, and Fuka decides to conquer the world with Desco as a one last memory.

They go to Earth, defeating many Defenders of Earth in their way. Des X reappears to them as Earth X and their final challenge. After being defeated, Earth leaves the Earth to Fuka and Desco's hands. After saying her goodbyes, Fuka tries to reincarnate but cannot due to the grave sins she committed(stealing from the Mint, refusing to become a Prinny and taking over Earth). Desco being glad that Fuka is still with her, they decide to conquer the Netherworld and Celestia next. The narrator states that it was not long before Fuka became known as Galaxy Empress Fuka.

Fuka, along with Desco, appears as a playable character in Disgaea 3: Absence of Detention. Fuka and Desco plan to be hired as teachers at Evil Academy in order to lead a group of demons to help them take over the world. When the interview starts, Desco successfully answers all the questions that Mao gives her, leading her to be hired instead of Fuka. Fuka is enraged and decides to fight Mao for the teacher's position. After losing the fight, Desco decides to refuse the position if Fuka would not be hired. Feeling sorry for the two, Almaz convinces Mao to hire both of them with Fuka being happy over the decision. However, both Fuka and Desco will have to split their salary as part of a "two-for-one deal". They both join Mao's party after that.

Fuka, Desco, and Emizel appear in the Special Content Episode I. Girl Theater.

Fuka, along with Desco, make an appearance in Disgaea D2: A Brighter Darkness as DLC characters. They were able to be downloaded free for the game's first month of release in Japan, after that, they cost the same as other DLC characters. Fuka and Desco can be downloaded as a bundle for $2.99 for the NA version of Disgaea D2. Fuka retains all of her Disgaea 4 specials, some of them were modified to have faster animations or higher base powers.

Fuka is a heavy hitter type of character, with high Attack and Defense but low Intelligence and Resistance and as such she is proficient with Axes and is also with good Swords. Her native Evility "Dream Girl" decreases special attack damage she receives by 50% (reduces special damage by 20% and increases her own by 10% in Disgaea 5). Her unique specials are Bomb-Bat-Stic, Glorious Hitter and Prinny Kaiser XX.

Bomb-Bat-Stic is a fire element attack involves Fuka taking out a lit bomb before tossing it upwards and sending it towards her enemies with her bat. It hits one space and has a free range of 3 spaces (straight).

Glorious Hitter  hits 3 spaces in the form of a triangle. Fuka changes the background into a baseball court and with the enemies on the 3 bases. Before a Prinny pitches her a bomb, Fuka tosses her bat and rushes towards the enemies at each base, smashing into them before touching home base and scoring a home run. This attack has a free range of 2 (straight).

Prinny Kaiser XX hits 3 spaces vertical then 5 spaces horizontal (forming a T-shape). In this fire element attack, Fuka is enveloped in a red aura before flying into the sky. She summons down a giant Pringer X with the enemies backing away from it. Her character bust is shown to order Pringer X to attack the enemies with 2 eye beams, creating a large explosion.

Fuka concept art.
Add a photo to this gallery 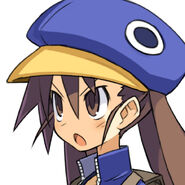 Fuka's portrait in Disgaea 5
Add a photo to this gallery

Fuka's sprite in Disgaea 4 and D2

Retrieved from "https://disgaea.fandom.com/wiki/Fuka?oldid=46284"
Community content is available under CC-BY-SA unless otherwise noted.