Fubuki is Yukimaru's elder brother. He's a mysterious and skilled ninja bent on defeating Zenon in order to avenge the Snow Clan. Fubuki is cold hearted and will do anything to destroy Zenon. He is especially skilled in the art of Henge, being able to transform into a Prinny or even Yukimaru. He was also responsible for transforming Tink into a frog.

Yukimaru later states that, due to the Fake Zenon's attack on the Snow Clan, Fubuki was blinded. This is shown in his character art, and he even states it (though it was in the guise of Yukimaru at the Colloseum "Even though my eyes see no light, my heart sees everything.").

Fubuki first appears during chapter eight, attempting to assassinate Rozalin while disguised as Yukimaru.  He voices the opinion that killing her will draw out Zenon, allowing him to take revenge.  However, Rozalin is joined by Adell and his family, and, after a brief skirmish, he retreats, swearing to return.

He makes his influence openly know in chapter 10 of the game, as the cast is trying to track down Etna's Prinny Squad, who left her after she lost her levels. It turns out Fubuki had shaped them up into a decent fighting force, far outstripping what they were under Etna's command, who used fear as a motivational tactic.

After his defeat, he attempted to attack Rozalin again, and was nearly killed by the Fake Zenon. However, he had enough strength remaining to use Snow Melody's ultimate attack, "Midare Fubuki", killing the Fake Zenon a second time. He was taken to Adell's house for treatment, where Rozalin used the remedy they obtained from Old Man Geo to save his life.

While the cast was at Shinra Tower, Fubuki headed off for Zenon's Castle on his own. He becomes a Neutral Ally for stage 13-3, Killer's Hall, and even teaches Yukimaru how to use "Midare Fubuki". He later remains in the Land of Carnage as an unlockable character.

Like Yukimaru, Fubuki has a basis of Water elemental techniques. However, rather than using Swords, like his sister, Fubuki excels in using Axes, as shown by his appearances within the game. Though he is also well versed in the art of Henge he, unfortunately, has no in-game moves that make use of this.

Players intending to collect every item in the game must remember that Fubuki's Axe is a unique piece of equipment that will only appear two times in the entire game (unless one reboots from another playthrough). It appears in Maps 10-4 and 13-3. 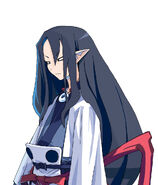 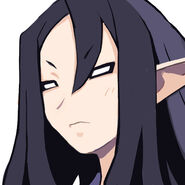 Fubuki's Concept Art
Add a photo to this gallery
Retrieved from "https://disgaea.fandom.com/wiki/Fubuki?oldid=47756"
Community content is available under CC-BY-SA unless otherwise noted.