The Flora Beast is a Monster Class in Disgaea 3: Absence of Justice. It is a beautiful but deadly forest creature.

Retaining her appearance from Disgaea 2: Cursed Memories, the Flora Beast appears as a young female blooming out of a flower. Her skin is green to show her plant-based origin. She has basic blond hair with 2 "flower buns" on it. The Flora Beast is known for releasing a healing aroma from her petals (as shown with her native Evility, Sweet Aroma, which heals 20% of her adjacent ally's HP). Her stats are fairly balanced between ATK, INT and RES. All of her unique skills are ATK-based, but she can use magic as well, since she can use Wind and Healing Spells. 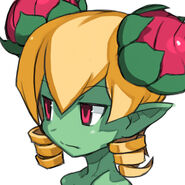 Flora Beast's Cut-In Image
Add a photo to this gallery

Retrieved from "https://disgaea.fandom.com/wiki/Flora_Beast_(Disgaea_3)?oldid=37165"
Community content is available under CC-BY-SA unless otherwise noted.