The Fire Demon is a humanoid-looking demon covered in flames and metal armor. He also has most of his body exposed to show off his large muscles. His hair is made of fire, his legs are engulfed in fire and fire will spurt from his fists every now and then. His face looks similar to the face of Zetta from Makai Kingdom. His high attack stat makes him deadly to face off against. All of his skills are fire based. When a battle is getting intense, he unleashes even more power (as shown with his native Evility "Overdrive" which increases his ATK by 10% for every Critical Hit). The Fire Demon can easily acquire Critical Hits as well. He can also Magichange into a Sword. 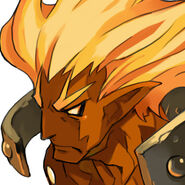 Fire Demon's Cut-In Image
Add a photo to this gallery

Retrieved from "https://disgaea.fandom.com/wiki/Fire_Demon?oldid=35194"
Community content is available under CC-BY-SA unless otherwise noted.