Finale: Super Battle is the final episode of Disgaea 3: Absence of Justice.

Having decided to take out his anger on Super Hero Aurum, Mao returns to the Overlord's Castle that was visited in chapter one to find it all cleaned up, much to his anger. Aurum is encountered almost instantly but he leaves them, considering Mao to be too much of a failure as an Overlord to fight himself. After fighting several enemies and an encounter with the Vato Brothers several Diez Gentlemen are met but they flee upon the arrival of Master Big Star, Salvatore and the PTA, the first two joining Mao's group.

Aurum is once again encountered in a room that seems to contain Mao's Dad along with three Diez Gentlemen. They fight though Aurum laughes at their efforts and retreats to another room (much to Almaz's confusion as he would have had an advantage if he had tried to finished them there).

In the final battle, Aurum changes into a grotesque form that incorporates parts of every Overlord he defeated so far. He is finally defeated, reverting to his normal form and admitting that he just wanted to live and die a hero, to die in battle against the strongest Overlord. Aurum asks Mao to finish him off so Mao approaches him, drawing his blade. Just as he is about to strike Aurum down he stops, announcing that he is just kidding and plans to capture Aurum and perform experiments on the Super Hero. Aurum screams out in horror.

With all of that out of the way Mao returns to his father and find him fading away, moving on to the afterlife. The two are left alone and Mao's father admits how proud of Mao he is, making his son the new Overlord before he disappears.

The game ends with Mao becoming the new Overlord, Mr. Champloo disappearing as usual, and a shot of Almaz and Sapphire being married. 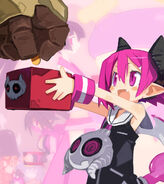 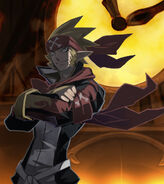 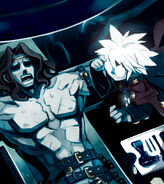 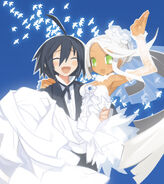 Add a photo to this gallery
Spoilers end here.
Retrieved from "https://disgaea.fandom.com/wiki/Finale:_Super_Battle?oldid=31808"
Community content is available under CC-BY-SA unless otherwise noted.