The Female Healer (also known as the Cleric) is a recurring humanoid class in the Disgaea series first introduced in Disgaea: Hour of Darkness.

Female Healers are of course female humanoids, with a full body robe that leaves their cleavage revealed. They wear cuffs with a short chain in between their hands and arms.

They are said to be fallen angels from Celestia who introduced and spread healing magic across the Netherworld. They were originally looked down upon by the demons, until the demons realized that healing magic is necessary in battle. Unlike their male counterparts, they believe healing their wounded comrades is a necessity and thus they are committed to developing their skills and school of magic, which has been growing for thousands of years. They follow the practice of Vinaya, or keeping their eyes closed at all times if possible. It is said that powerful Female Healers rival even the Seraph. Sera Winguard is a famous female healer.

Healers serve an important purpose in learning healing spells which use SP to allow characters to recover HP. With healing, it is possible to have damaged characters continue fighting. These healing spells can be passed to other characters via use of the Master/Student Relationship system.

Since Disgaea 2: Cursed Memories, in which healing spells use the Resistance stat instead of Intelligence, healers have significantly higher RES stats than most classes. Orbs are suggested in order to boost their RES in order to make it more likely that they restore all HP when healing an ally.

The Healer class was introduced in Disgaea: Hour of Darkness as one of the starting classes, and leveling one up is required to obtain the Angel class.

The Healer returns as one of the starting classes in Disgaea 2: Cursed Memories. The class name is shortened to Healer as there are no male healers in this game.

The Healer returns as one of the starting classes in Disgaea 3: Absence of Justice.

The Healer returns as one of the starting classes in Disgaea 4: A Promise Unforgotten. New to the healer class is the Evility Corpse Heal, which grants the user a 50% bonus to all healing magic when an ally is adjacent. This can be exploited with a tower of 9 for a 450% boost to the healing spells.

The Healer returns as one of the starting classes in Disgaea D2: A Brighter Darkness.

The Healer returns in Disgaea 5: Alliance of Vengeance, again as a starting class, renamed to Cleric.

The Female Healer's most proficient skill in Phantom Brave is Healing (noted by the heart symbol), with Degeneration (Noted by a Skull/Death symbol) coming in a close second. They learn 'Revive' at level 15, and are the only class (other than Marona) to learn this skill naturally.

The Healer in Makai Kingdom is most proficient with books and syringes, which play on her high intelligence and resistance. 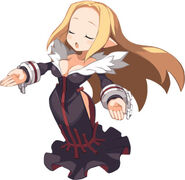 High-resolution Healer sprite
Add a photo to this gallery

Retrieved from "https://disgaea.fandom.com/wiki/Female_Healer?oldid=49202"
Community content is available under CC-BY-SA unless otherwise noted.