The Felynn is a Monster class in Disgaea 3: Absence of Justice. They originally appeared in Disgaea: Hour of Darkness, and have appeared in all 3 games with no design alteration. While in the previous games, Felynns were unlockable through normal means (generally speaking: killing or capturing), in Disgaea 3 they are only available as a Downloadable Content class.

The Felynn is, put simply, a cute Catgirl. They have fur covering their arms, legs and "sensitive" areas. They also have paws, cat ears, and a tail. They have their hair done up in a ponytail and tied with a bow. Their supple and athletic body lets them do various martial arts with ease. They have high speed and attack, making them the monster equivalent of the Humanoid Martial Artist classes. They have mastered the ability to unleash a counter attack no matter what they are hit with (as shown with their native Evility, "Special Counter", which makes it so that they can do a Counter Attack if they are hit by a Special Attack Skill. 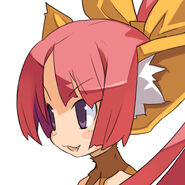 Felynn's Cut-In Image
Add a photo to this gallery

Retrieved from "https://disgaea.fandom.com/wiki/Felynn_(Disgaea_3)?oldid=37256"
Community content is available under CC-BY-SA unless otherwise noted.