The Felynn (also known as Kit-Cat and Nekomata) is a reoccurring monster class first introduced in Disgaea: Hour of Darkness.

Felynn are depicted as cat girls with long hair tied in a ponytail, with such features as large feline ears, a large bushy tail, arms and legs covered in fur beginning just above the elbows and knees, and large paws instead of hands and feet. They are also depicted with curvaceous bodies, having large breasts and muscular thighs. They wear extremely little clothing, having only small strips of cloth that covers their crotch and partially covers their breasts, and nothing more.

They are a clan that have a unique style of martial arts, and their cat ears have garnered them many fans throughout the netherworlds. According to Afternoon of Darkness, Felynn get along with the Succubus clan.

In Disgaea: Hour of Darkness, Kit Cats first appear in Chapter 5, alongside the Succubi that Maderas hired. Among the monster classes, they have one of the highest natural counter rates in the game. Because they make their first appearance in a stage protected by the Invulnerability Geo Symbol, with a little patience, it is possible to merge and capture a Kit Cat as high as above Level 100.

In Disgaea 2: Cursed Memories, they first appear in Chapter 4-3, alongside the Enemy Level up 10% Geo effect. This has lead to a trick that, with some patience, allows for players to capture high level Felynn. Felynn in this game have an innate ability that allows them to gain an additional 50% damage when they counter. Combined with their high counter rate, they can be high-damage units with proper preparation and equipment.

Disgaea 3: Absence of Justice has them as a DLC class, with their Magichange transforming them into a sword. One of their evilities allows for them to counter any attack.

The Felynn class reappears in Disgaea 4 as being included in game rather than DLC. They are first fought in Episode 5 and can be unlocked for creation after defeating any Felynn. Their primary Evility allows them to counter any special attack as long as the enemy performing the attack is in her attack range.

The Felynn returns in Disgaea 5. 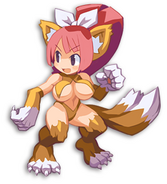 High-resolution Felynn sprite
Add a photo to this gallery
Retrieved from "https://disgaea.fandom.com/wiki/Felynn?oldid=49518"
Community content is available under CC-BY-SA unless otherwise noted.