The Faery is a Monster class in Disgaea: Hour of Darkness and its ports. The Faery is a good monster class to have in the beginning of the game. Its initial stats are slightly better than those of the Prinny, but only for the lower tiers. The skill "Demon Breath" is very effective because it can put targets to sleep.

As an enemy, this can be a very dangerous class and should be eliminated from the fight as soon as possible.

Faeries are demons that even appear in the Human World. In the Netherworld, their magic powers get dispersed, so they wear a special cape to prevent it. When it gets angry, a Faery swallows its enemy with its huge mouth. Unlike other demons, faeries have strong bonds within their species. 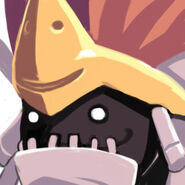 Faery's Concept Art
Add a photo to this gallery
Retrieved from "https://disgaea.fandom.com/wiki/Faery?oldid=45627"
Community content is available under CC-BY-SA unless otherwise noted.