Brianne Siddall
“But...that's why...I wanna earn the recognition I deserve with my own power. Emizel, the President's son, who used to ride his father's coattails, is indeed dead forever. From now on, I'm gonna carve out a life of my own as Death Emizel. And that...is my final answer. When I become a great demon who Pops would be proud of...that's when I'm gonna let the entire world know that I'm alive!”
—Emizel, Disgaea 4: A Promise Unforgotten

Emizel, full name Death Emizel, is a character from Disgaea 4: A Promise Unforgotten. He is the son of Hugo, President of the Netherworld. He is not as powerful as he thinks he is and he always uses his father's title to get respect. After joining Valvatorez's group, he decides to begin working to change himself as a person.

Prior to joining Valvatorez, Emizel was an egotistical boy who rode on his father's coattails, using Hugo's title in his own defense, and often rap in his dialect. Relying on his identity as the president's son, he thought he deserved to be respected and obeyed. However, at one point he finally realized and admitted that he was indeed a weak and powerless demon "a complete failure". As Death, he has not taken one soul prior to reforming himself as he has lacked confidence and the will to reap souls. After the events of the main game, Emizel is more confident in reaping souls, proven by him sending Prinnies' souls to the Red Moon at the start of the Fuka and Desco Show.

After this event, Emizel starts to work hard to change himself, to earn respect by his own power and not his father's, to become a proud and noble demon. He still shows respect for his father and when fighting him inside the Blight House, he claims he only wants to prove himself to his father. Emizel shows a fear towards women, thinking of Fuka, Desco and Vulcanus as scary when they are in their gossip circles and even vows to the moon not to get married.

It is here that Axel attempts to save himself by sucking up to Emizel, but a scheme of Fenrich's ends with Emizel "killing" Axel. Enraged, Valvatorez defeats Emizel and the Prinnies that Valvatorez fought for are released. Later, Emizel appears as Fuka's secret weapon, but is defeated anyway, and flees again.

Emizel appears again with Axel, promising (although unsure if his father would allow it until Axel assures him he will) the prisoners of Hades a pardon if they defeat Valvatorez, Fenrich, and Fuka. The first group of prisoner are defeated and Emizel flees with Axel, but not before hearing Valvatorez's lecture about keeping promises and his warning that he will feel the weight of a promise if he doesn't. After getting a third group of criminals, Valvatorez reveals that those prisoners are actually innocent (since he discovered this during his battle with the second group of criminals). Emizel denies this saying they are criminals, which cause the prisoners to shout out in defense on how the Corruptment just came up with excuses to imprison them when they were just acting as demons should. Fenrich then reports that his lord plans to take usurp the regime, Emizel shouts that they will never defeat his father. However, he is surprised to learn that the Prinny Instructor he was fighting was the once Tyrant Valvatorez, the same demon he looked up to as a child. Regardless, he still follows Axel to stop the Valvatorez's rebel party and goes to the Forbidden Chamber. Axel unlocks the seal of the Forbidden Chamber and lets Desco out, though she ends up killing Axel. Emizel trembles in fear as Desco prepares another attack aimed at him, but is save when Valvatorez uses himself as a shield. Relieved that he is still alive, Emizel then faints and becomes unconscious during the party's battle with Desco. When Emizel wakes up, he is handed a newspaper and learns that it says he died, becoming shocked on how his father would do that.

Emizel then follows the group to the Bureau in attempt to disprove the false report of his death, however, the newspaper workers trust the paper too much and consider him someone who is tarnishing the name of President Hugo's son. Fenrich reveals that he just used Emizel so they could get into the Bureau, but Emizel continues to try prove he is still alive. When finally meeting with the chief of the Bureau, Emizel asks her to change the news to tell everyone that he is still alive. While she does confirm Emizel is alive, she refuses to change the paper and say they can't have Emizel around when he is declared to be dead. Fenrich then tells Emizel that he sent a threat letter to the President saying he'd show videos of his son's failure if he doesn't stay out of his lord's way, and the President falsely reported Emizel's death knowing he was still alive to save himself. Now seeing the truth, Emizel is surprised how his father discarded him. After defeating the chief of the Bureau, Emizel admits he is a helpless and cowardly weakling. He then decided that he will no longer rely on his father and will instead rely on his own power to become a great demon that makes his father proud. Valvatorez questions if he is making that a promise and remembers his lecture on promises, Emizel agrees and says he'll keep his promise before joining.

After fighting his father alongside the rest of the Hades Party, Emizel learns that his father was a puppet ruler of the Netherworld, working under Nemo as a tool to further the latter's plans. He then ends up fighting Nemo and Fear the Great with the others. Emizel finally works up the confidence to reap his first soul after the fight, allowing Nemo to reincarnate as a Prinny and atone for his sins.

If you deploy the Legendary Tree Evil Symbol and set Emizel as Valvatorez's rival, a special epilogue featuring the two will play once you beat the main story.

In it, Emizel expresses his desire to become the Netherworld President. Valvatorez questions if this desire is because of Emizel's father once holding the office, but Emizel reveals to him that that's only half the reason why. Emizel tells Val that he wants to see how much he's grown since they first met, and to do this he's decided to challenge Axel for the position. He also expresses that he's grown a lot through the battles he's fought as a member of the Hades Party. Val commends him for the work he's put into changing himself, surprising Emizel by referring to him by his first name instead of "rascal". Emizel then makes a promise to Val that after he becomes the Netherworld President, he'll work with him to re-educate the universe.

Emizel's class is Death and has a Weapon Forte in Staffs only (and bows in A Promise Revisited). He learns Fire, Wind and Ice spells up to Giga making him similar to a Prism Mage/Skull. His native Evility, Concentrate increases magic damage by 50% on a single target. He also has a 25% resistance to all elements and has high Aptitudes in INT, SP and RES.

His first skill, Soul Reaper has a free range of 3 and a Power Level of F. It involves him trying to attack a enemy with his scythe but is afraid to attack until a Reaper demon's scythe hits the target and the Reaper comes to retreive it.

Emizel's second skill, Grim Specter hits in a cross AoE in front of him and has a Power Level of E. Emizel's face turns into a skull with two horns. He jumps high into the sky and charges a dark laser with his horns and fires it at the enemies. It is learned at Level 32.

His final skill, Delta of Death, has a free range of 4 and hits in a diamond shape, with a checkerboard-like pattern. It has a Power Level of D. Emizel summons a portal and teleports, he transforms into a giant demon with his cloak and a long bone tail with his scythe. Emizel's scythe spins around, creating 3 seals representing Fire, Ice and Wind. The enemies are hit with a vortex of fire, wind and finally ice which freezes the enemies before the ice shatters. It is learned at Level 80.

Emizel appears in Disgaea 5 as a DLC character, sold in a pack that also contains Fuka and Desco. He is encountered with the other two characters in the DLC Chapter "I. Girl Theatre". He and Desco both mistake Fuka's anguish over gaining weight with her being in love, and take actions to remedy the situation. All three eventually ally with Killia after beating the third stage.

Emizel comes with his Death Sickle (a sword weapon), and has a 25% resistance to all four elements (Fire, Ice, Wind, and Star). He has a 10% Weakness to attacks from Fist, Gun, and Axe weapons, a 10% resistance to Sword attacks, and a 20% resistance to Staff and Monster weapon attacks. His highest proficiencies are with Staves (S), Bows (A) and Swords (B). His Evility, "Death Spell", gives him a 20% chance to deathblow enemies when using magic attacks. Despite being the son of a Netherworld President (the equivalent of an Overlord, as he's known to be on the level of Tyrant Valvatorez), he does not have an Overload skill, and would have to learn a "generic" Overload via the Dark Assembly.

Delta of Death is upgraded from B to B+, though its range is kept the same. He also receives the Combination Attack "Delta Calamity", a 3x3 ranged attack (with a range of 4 horizontally or vertically) which can be performed with Desco.

Emizel appears as a Post Game character, where a quantum distortion causes him to appear in Laharl's Netherworld while on his way to Valvatorez at the start of Disgaea 4 and mistake Laharl and his vassals for the rebels. After he is defeated, the distortion closes by itself, trapping this version of Emizel in Laharl's Netherworld. Etna and the others end up taking pity on him and let him join. He is recruited immediately after this, and has the Death Scythe Fun Weapon equipped when recruited. He retains all of his specials from Disgaea 4. Notable differences are that his Soul Reaper attack has a new visual while his Delta of Death's Power Level has been increased from D to B and its range has been reduced from 4 to 3. When recruited he already knows Fire, Wind and Ice at their Mega and Giga levels.

Emizel appears as an obtainable character. Alternate variations of Emizel can also be obtained. 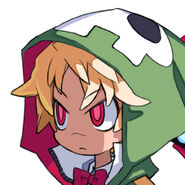 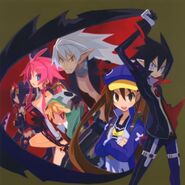