Eclair is a character from La Pucelle: Tactics. She is the Princess of Paprika who is a close friend of Priere. She has a split personality known as Dark Eclair, who makes her first appearance in Chapter 4 of La Pucelle.

Signs of a Dark Knight appear around Cresson Castle, prompting La Pucelle to investigate at the behest of the Queen. They eventually find Eclair passed out. Alouette discovers that Eclair had retreated inside of her heart, prompting an alternate personality to take over, causing the disturbances. She teleports the party into Eclair's Heart, where it is revealed that Dark Eclair is a manifestation of Eclair's stress surrounding her pressured ascension to the throne by her mother and also from her desire to see the outside world. Alouette casts a spell that weakens Dark Eclair's hold over the original Eclair, essentially sealing her in the deepest depths of Eclair's heart.

Her mother is then told of Eclair's plight by Priere. She then allows Eclair to accompany La Pucelle in order to fulfill her daughter's wishes. In Chapter 12, Dark Eclair reappears again, forcing confrontation. However, La Pucelle defeats her in battle, prompting the original Eclair and Dark Eclair to make amends by agreeing to share Eclair's body.

In La Pucelle, Eclair is able to change between her normal self and Dark Eclair at will. Dark Eclair has her own attacks, and both versions of her have an attack where she splits off from her other self and both double-team the opponent.

Eclair appears in her normal form as a DLC character in Disgaea D2, with Dark Eclair making appearances in her special attacks. 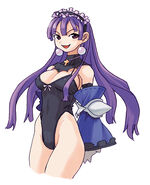 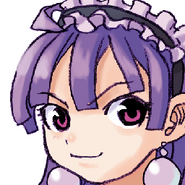 Dark Eclair's sprite from Disgaea D2.
Add a photo to this gallery

This article is a stub. Please help the Disgaea Wiki by expanding it, so it won't stay a little shrimp like Laharl.
Retrieved from "https://disgaea.fandom.com/wiki/Eclair?oldid=47797"
Community content is available under CC-BY-SA unless otherwise noted.