The Dragon Zombie is a monster class in Disgaea 3: Absence of Justice. It is a vicious, high level monster of amazing physical strength.

The Dragon Zombie retains the design it had in Disgaea 2: Cursed Memories; a Dragon's skeleton that was reanimated by the dark powers of Necromancy. It has small red eyes inside its skull and, unlike the official Dragon, is hunched over and has 2 large horns on the sides of its head (although, one horn appears to have been cut off). Its fossilized body is incredibly hard, giving it massive defense to physical attacks (this is demonstrated with its native Evility, Immortal Body, which decreases physical damage by 50%). However, the Dragon Zombie isn't too bright and runs completely on primal instinct, meaning a Dragon Zombie using magic attacks is totally out of the question. Its body is also pretty sensitive to magical attacks. The Dragon Zombie can also Magichange into an Axe. 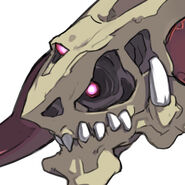 Dragon Zombie's Cut-In Image
Add a photo to this gallery
Retrieved from "https://disgaea.fandom.com/wiki/Dragon_Zombie_(Disgaea_3)?oldid=38115"
Community content is available under CC-BY-SA unless otherwise noted.