The Dragon is a Monster Class in Disgaea 3: Absence of Justice. It is known throughout the Netherworlds as being a powerful and high level monster.

The Dragon retains his design from the previous 2 Disgaea games. The Dragon serves the same purpose he has always had, sheer physical muscle. His native Evility Dragon's Rage increases his Offensive power by 10% every time he gets hit with an attack. The boost resets after he unleashes an attack of his own. Like the Nekomata, he is a downloadable content character. 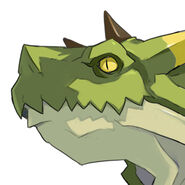 Dragon's Cut-In Image
Add a photo to this gallery

Retrieved from "https://disgaea.fandom.com/wiki/Dragon_(Disgaea_3)?oldid=36439"
Community content is available under CC-BY-SA unless otherwise noted.