Disgaea D2: A Brighter Darkness (Disgaea Dimension 2 in the Japanese version) is a game for the PlayStation 3 released as part of Nippon Ichi Software's 20th anniversary. It was released on March 20th in Japan and on October 8th, 2013 in North America. The game's events take place after those in Disgaea: Hour of Darkness.

Laharl has been crowned Overlord of his Netherworld and has taken his father's place on the throne. However, the demons of his Netherworld do not respect him or his authority. A particular group of the late king's former vassals, called the Krichevskoy Group, are trying to usurp him and put someone that they find to be a more suitable leader on the throne. Compounding the issue is the sudden appearance of rapidly multiplying Yuie flowers that are changing the atmosphere of the Netherworld. The Krichevskoy Group blames Laharl for the sudden appearance of the flowers, believing it to be an act of aggression from the angels in retaliation for the events that occurred in Disgaea: Hour of Darkness.

Gameplay in Disgaea D2 remains the same as other core Disgaea games in the series. Monster Mounting is a new feature that replaces Magichange from Disgaea 3 and Disgaea 4. A humanoid character is able to ride on top a Monster allowing the humanoid character to attack on top of the monster while the monster takes damage for the humanoid character. Characters can also build relationships with each other and their compatibility is determined by a heart scale of 0 to 5. This is called Likeability. Likeability also affects the strength of collaboration attacks used when Monster Mounting depending of the relationship established between a humanoid character and a monster character, as well as the strength and probability or Team Attacks. Another feature is the Cheat Shop, which allows the player to modify certain attributes such as lowering the gain rate of something like experience, to raise the gain rate of something else, like Hell. Other changes are that enemies and players can have HP/SP well beyond 10 billion, up to 99 billion, unlike the older Disgaea games. The cap can also be increased further due to the new Rasetsu Mode which increases the HP/SP cap to 400 billion and all other stats can have a cap of 999 million. The player can also gain a very small percentage of the enemy's stats when he/she defeats enemies in the Land of Carnage mode.

Stronger Enemies bills have been changed to a Cheat Shop feature and can be changed freely. Throwing is not limited to throwing straight similar to a Gun's range, but the player can now throw freely within their range similar to the range of a Bow. The Item Bag and Warehouse have been merged into one, with different categories for each Item and the player can have up to 999 Items. The Item World returns with different aspects of it being renamed to a Sea Theme. Changes have been made to Mystery Room appearance(now called Mystery Islands), Item Assemblies and the inclusion of Bonus Stages which replace Reverse Pirating. The Demon Dojo is a new feature that allows players to increase their Aptitudes to 300%, similar to the Class World and Chara World from previous games. It also can increase specific stats upon level-up, Likeability, EXP, HL, Mana, Weapon EXP, and Skill EXP for characters as well. Multiple characters can be assigned to gain each effect of the Devil Dojo, similar to the Club and Evil Symbol system in previous games.

Weapon Mastery has returned from Disgaea: Hour of Darkness and Cursed Memories. A new feature is that players can raise the rank of a Character's Weapon Mastery when creating a character, or determine a mage/skull's Elemental affinity. Skill Boosting has been removed which allows for a more balanced damage formula like in Disgaea 1 and 2. Bills can be passed by bribing the Senators with HL and Legendary skills are now bought with Hell instead of Mana. The player can change the character(s) that they use to move around the base instead of being limited to Laharl, Etna, and Flonne. Land of Carnage is now unlocked after beating the game as a feature in the Cheat Shop rather than being a separate world. The X-Dimension/Dark World does not return in Disgaea D2 however. Other changes include visual improvements to Menus and HUDs, a more detailed movement grid, and a provided description for the effect of each Innocent. An Innocent Warehouse has been added, allowing the storage of multiple Innocents.

A preview image of the game show that it will star Laharl, Etna and Flonne. Laharl and Etna have received mild redesigns (Laharl now wears pants and fingerless gloves while Etna wears shorts) and Flonne is in her Fallen Angel Form (albeit with a different neck bow and a bow on her left leg). The image showed several generic class characters like the Male Warrior, Female Warrior, Skull, Witch, Healer, Thief, Prinny, Gunner, Beastmaster, Ninja, Samurai, Male Brawler, Female Brawler, Archer, Magic Knight, Masked Hero, Shaman, Onmyo Monk and Celestial Host. The image also shows a newly designed Male Healer, a female Heavy Knight (who Barbara is based on) and a male Celestial Host.

A magazine article also revealed more information about the game, as well as some art and screenshots. One image in particular showed off various characters. Apart from Laharl, Etna, Flonne and a Prinny, the image also showed off several new characters. One character, who appears to be an angel trainee, appeared in previous artwork for the game, confirming her role as a major character. This character was later revealed to be named Sicily and claims to be Laharl's sister.

The game will also feature Asagi, returning from previous games. The game's trophy list also revealed that most of the Disgaea 4 cast (Valvatorez, Fenrich, Emizel and "Vulcanus") will return, along with Axel and Petta (who actually uses Zetta in his Book form as a weapon). The trophy list also revealed that Darkdeath Evilman from Zettai Hero Project: Unlosing Ranger VS. Darkdeath Evilman and Porkmeiser (Hoggmeiser's son) will also be in the game.

Other major characters are the King Krichevskoy faction, a group of demons who feel Laharl is unfit to be Overlord and that Barbara would be a better choice. Known members include Grosso (a gold Gargoyle), Garungun the Destroyer (a red-brown Golem) and Rainier (a blue Sea Angel who is Laharl's former babysitter).

Other images for the game also show various monster class characters, namely Zombies and Dragons as well as Pumpkins, showing that the class will return after being absent from the previous 3 games. It also had an image that showed a Nether Noble, suggesting that Hoggmeiser (or at least the Nether Noble class) will return as well.

The first trailer for the game revealed several more monsters like Slimes, Catsabers, Great Wyrms, Gargoyles, Ghosts, Rifle Demons, Alraunes and Mothmen. A screenshot of the game also showed Laharl riding a Dragon, revealing that Monster Mounting will be a feature in the game (though what monster mounting does has yet to be revealed). Further screenshots also revealed the Succubi, Reapers and Nekomatas as well as the return of the Golems, Dark Knights and Serpents from Disgaea: Hour of Darkness. An entirely new monster type, the Sea Angel, was also revealed in later screenshots.

The game will be having a limited edition in Japan that contains an art book, a soundtrack and figures of Etna and Flonne.

Further information on the game revealed that Krichevskoy's castle will again act as the hub area for the game and that players can do as Laharl, Etna and Flonne (with the castle residents having different dialogue with each one of them).

In battle "Events" are also in the game. Special events that trigger between characters when conditions are met on a map, such as particular characters standing next to or attacking each other. As example: "In one of these events, Laharl praises Sicily and she gets bashful."

The game will also feature a new weapon type, Book, which seems to act as a second magic based weapon and allows users to summon spirits to damage their targets. A Brighter Darkness will also feature slightly more in-depth character customization, such as making Personality Types alter a unit's Evility, returning from Disgaea 4, besides their voice. The Weapon Mastery system from the first two installments is set to return rather than the Weapon Forte system as seen in Disgaea 3 and Disgaea 4.

The game also features the new Demon Dojo that allows players to increase the gain of stats when characters level up.

After completing the game, many things are unlocked, such as new options in the Cheat Shop and several bills in the Dark Assembly. These bills include options to fight and recruit Emizel, Petta, Axel, and Artina, in that order. Barbara will not be in your party after the credits but you will have the option to fight her to get her to rejoin you.

Like Disgaea 3 and Disgaea 4, there is DLC included in the game. Pre-ordering the game gave players a code allowing them to download "Legacy Costumes" for Laharl, Etna and Flonne allowing the player to use their sprites from Disgaea 4: A Promise Unforgotten. 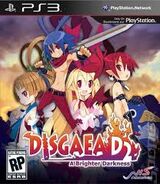 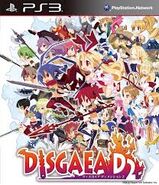 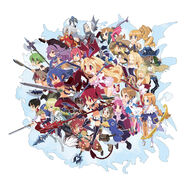 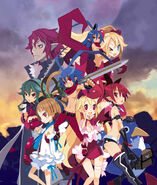 "Pure Flonne", Flonne's form after receiving the power of an archangel 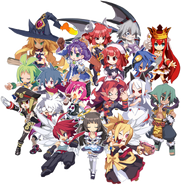 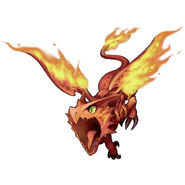 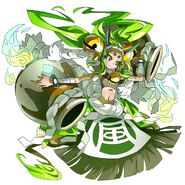 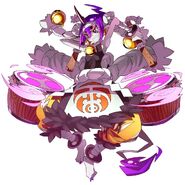 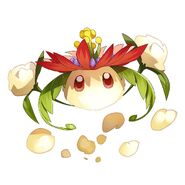 2P Etna in a Cutscene

"Monster Mount" used on a Dragon