Start a Wiki
Disgaea 5: Alliance of Vengeance (魔界戦記ディスガイア5 Makai Senki Disugaia Faivu, literally: Netherworld Battle Chronicle Disgaea Five) is the fifth title in the main series of Disgaea games, and the first installment on the Playstation 4 system. It tells the story of various Overlords who join together as a Rebel Army, led by a young wandering Demon named Killia, in order to take vengeance against Demon Emperor Void Dark whose goal is to conquer all the Netherworlds. With it, the game has a vengeance theme to it. The game was released in Japan on March 26, 2015, with the American release on October 6, 2015. A re-release known as Disgaea 5 Complete for the Nintendo Switch was released on May 23, 2017 in America.

With the help of his army of soldiers known as The Lost, the Demon Emperor Void Dark has been devastating numerous Netherworlds. The Overlords ruling those Netherworlds, desperate to defeat Void Dark, begin an unlikely alliance to save all the Netherworlds. 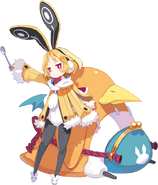 Zeroken
Add a photo to this gallery

Killia (voiced by Mamoru Miyano) is a powerful demon of mysterious origin with a personal vendetta against Void Dark. He traverses the Netherworlds to get his revenge.

Seraphina (voiced by Sarah Emi Bridcutt) is a wealthy princess and Overlord from the Gorgeous Netherworld. A child of privilege and noble upbringing, she defies her father's desire for her marriage arrangement with Void Dark. So she runs away to fight The Lost.

Usalia (voiced by Satomi Akesaka) is the heiress from the Toto Bunny Netherworld. She is cursed by Majorita with a condition which causes her to go on an out-of-control rampage unless she regularly eats curry. In battle, she rides on a giant yellow Prinny.

Red Magnus (voiced by Takehito Koyasu) is the overlord of the Scorching Flame Netherworld, a literally burning Netherworld inhabited by those with burning machismo. He values everything primal, and believes that power is everything. His motivation to defeat Void Dark is to become the titularly strongest Overlord.

Christo (voiced by Junji Majima) is the Overlord of "a Certain Giant Netherworld". He is extremely talented as a war strategist and a master of intelligence, and will resort to any strategy or tactic to win a battle. He decides to take advantage of Killia's powers, planning to use them as a tool in his developing plan in order to assassinate Void Dark.

Zeroken (voiced by Tetsuya Kakihara) is a small-fry Overlord who has already been fighting against The Lost. He has a smug personality, but can also change his attitude depending on the opponent or who he interacts with.

The core gameplay remains the same as in previous Disgaea games. Like Disgaea 4 and Disgaea D2, HD sprites are used to represent the characters on-screen. Due the PS4's stronger hardware specs and higher memory, up to 100 sprites on the screen can be shown without the game's performance suffering. In comparison, previous Disgaea games would slow down if too many sprites were on the screen, as older hardware had a much smaller amount of RAM in comparison to the PS4's RAM. There are multiple stages that take advantage of the stronger hardware, which feature over 100 enemies. In addition, a new feature to speed up battle skits up to 4 times the normal speed is included.

Magichange and Dual Magichange have returned in Disgaea 5. Characters can also equip more than one weapon, switch between their use in normal attacks, and they can use the weapon skills of the extra weapon they have equipped.

Disgaea 5 uses the Weapon Mastery system found in Disgaea D2 instead of Disgaea 3 or Disgaea 4's Weapon Forte system. There are individual damage resistances for each type of weapon in addition to the standard elemental resistances. Disgaea 5 also adds a Star element resistance. The Weapon Mastery system has been overhauled, as the max Weapon Mastery Level is now 100 instead of 255 like in previous games. There is now Armor Mastery, which increases as characters get hit by attacks. Armor Mastery grants stat bonuses to armor-slot equipment. Monster Weapons also have their own weapon mastery as well.

Skill Boosting returns from Disgaea 3 and Disgaea 4, however, instead of increasing a skill's damage multiplier, boosting a skill will increase its Power Rank. A skill can be boosted up to nine times, each boost will subsequently increase the SP cost by a significant amount. Skill levels have been reworked, as higher leveled skills will have lower SP costs instead of higher damage like in previous games.

Another new gameplay feature is Squads. Squads are similar to the Club system from Disgaea 3, where characters gain Squad-exclusive bonuses based on the squad they are in, or can allow the player to access certain facilities within the hub. Leaders of squads gain access to a Squad Attack Skill. Prisoners can also be assigned to level up Squads in order to strengthen Squad bonuses and gain access to new Squad bonuses.

Other new features include the Innocent Farm. The Innocent Farm functions similarly to the Day Care centers found in the Pokémon series. By leaving Innocents in the Innocent Farm, Innocents will grow as the player completes battles or clears stages in the Item World and the Chara World. Innocents can breed after a certain amount of time and create a new Innocent.

The player can make curries by the Curry Shop. The player can choose what ingredients to use in a curry, and whatever ingredients the player uses will determine the effect of the curry. Curry can last up to 100 battles depending on how long it was cooked for. Curry can have multiple effects such as increasing Critical Rate or adding HP/SP regeneration. The effects of a curry will effect every character in the party.

The Spellbook weapon from Disgaea D2 does not appear in Disgaea 5. However, there are some book-styled Staff-type weapons. Both types of monster weapons share the same resistance stat. All other previous weapon types reappear in Disgaea 5.

This article or section is a stub. Please help the Disgaea Wiki by expanding it, so it won't stay a little shrimp like Laharl.

Retrieved from "https://disgaea.fandom.com/wiki/Disgaea_5:_Alliance_of_Vengeance?oldid=46205"
Community content is available under CC-BY-SA unless otherwise noted.