Start a Wiki
Disgaea 4: A Promise Unforgotten (魔界戦記ディスガイア4, Makai Senki Disugaia Fō, literally: Netherworld Battle Chronicle Disgaea Four) is the fourth installment in the Disgaea series and the second Disgaea game to be on the Playstation 3. It stars a Vampire named Valvatorez who leads a coup d’état in the Netherworld in order to reform its corrupt leadership. As a result, the game's themes are deeply-rooted in politics. It has improved graphics from Disgaea 3: Absence of Justice and an "Online Mode". It was released on February 24th in Japan, September 6th in North America, and November 25th in the EU.

The new main characters are Valvatorez, a vampire and former tyrant, Fenrich, a werewolf who serves Valvatorez, Fuka, a human who wears a Prinny themed school uniform due to no Prinny outfits being available to her because of budget cuts, Vulcanus, an angel who's very fond of money (even being called the Angel of Avarice), Emizel, a spoiled brat kid who happens to be the son of the current Netherworld president, Hugo, and DESCO, a rejected final boss (her name is an acronym for "Death/Extermination Submersible Combat Organism").

The game also features returning characters, including Axel, who has become the warden of Hades whom Valvatorez and Fenrich serve under, as well as Flonne, Laharl, and Etna. Flonne is no longer as a fallen angel but returns as Celestia's new archangel. A code that comes with first print copies in Japan allows players to download her in her Fallen Angel Form for free. A code was also given to people who pre-ordered from Gamestop as well as pre-ordered from NISA's official site (given via e-mail). Pleinair also returns in the game, serving the same purpose as she did in Disgaea 3. Axel, Raspberyl, Archangel Flonne, Etna, Laharl, Asagi, Prinny Kurtis, and Zetta (humanoid form) are able to be fought and recruited in the post-game.

Other classes include the Gargoyle, who was absent in the series since the original Disgaea. Also included is the Professor class from Makai Kingdom, Battle Suit, Onmyo Monk, Android, and the Bouncer.

The sprites have been changed into HD, although players can change them into their older format for nostalgia purposes.

The special Limited Edition version of the game contains an artbook, a CD and a Nendoroid figure of the character Fuka. The same limited edition is available in North America (with the Nendoroid Fuka figure replaced with a Fuka figure from the Disgaea 4 Trading Arts series) along with an upgraded version that has all previously mentioned items and 9 figures of the characters (Also from the Disgaea 4 Trading Arts series).

All players with a Disgaea 3 save file will unlock the "Hall Monitor" Evil Symbol. The symbol allows confiscation of items from Netherworld Assembly representatives. The symbol is also unlockable through normal gameplay by stealing any item from any enemy, so those who haven't played Disgaea 3 won't miss out.

The Magichange feature that was introduced in Disgaea 3 returns in Disgaea 4 as well, while also being expanded. Some added features include:

Interestingly enough, this means one can access both skill sets and attack two times per turn with the same character. If a character is dual-wielding weapons, the second weapon will override one of the armor slots.

The player can also get an evil symbol that allows them to combine two giant monsters into a giga monster with increased stats and the same size.

There is a new Punishment system called Educational Coaching. By capturing an enemy unit (by throwing them into the base panel) the player can use the Discipline Room to punish and torture them. By torturing them, various options will be available, such as unlocking a treasure chest in one of the story maps, stealing their money, and recruiting them into becoming an ally. This can be done on both humanoid classes and monsters. The player can only capture classes they already have access to. This feature is commonly used to acquire parts for Pirate Ships.

As with Disgaea 3, Disgaea 4 incorporates different Tower Attacks. This installment also includes new abilities to use when in a tower (such as the ability to move the tower and the ability to use the tower to grab enemies and items).

There is an online mode in the game in which the player can create a custom pirate ship and send characters into the internet to barge into other player's games. There's also an automatic level arrangement system. For example, when a player goes online to fight a random person and their characters are around level 2,000 then they will fight someone at around that same level instead of someone at a level higher or lower. Also the player can obtain a Red Cellphone from a Cellphone seller in the item world which allows them to call a random person whose Defense Minister will help in battle, however the Defense Minister can be any level and is not controlled.

The player can create their own custom maps in the game. They can put the map they created online for other people to play and rate. They create maps by placing tiles, characters and Geo Blocks in a grid like area. Once completed they can name the map and give it a description. However, this feature is slightly altered in North America and Europe due to differences in regional regulations. Map parts are purchased with CP, gained from completing Pirate Duals, other Users' Maps which varies from landform parts, Geo Blocks and other decorations.

Similar in fashion to Zettai Hero Project: Unlosing Ranger VS. Darkdeath Evilman the player can customize the Hades hub area in this game. This is done through the Map Creation feature. Players are also given the ability to select which character is in charge of the various shops (example: making Fuka the Item Shop Keeper or making Flonne the Dimensional Gatekeeper).

In Disgaea 4: A Promise Unforgotten, the cameos are not playable characters but are instead used as the conveyors of the Omega spells. The following cameos seen within the game include:

Disgaea 4 much like its predeccesor contains a large amount of DLC.

A port of the game for the PlayStation Vita titled Disgaea 4: A Promise Revisited was released in January 2014, roughly two years after the original version was released. This version contains all the DLC from the PS3 version on-cartridge and features a new bonus story featuring Tyrant Valvatorez and Sister Artina. 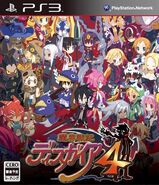 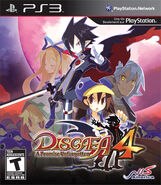 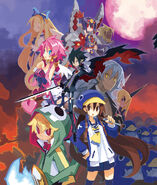 DLC characters.
Add a photo to this gallery

Magichange involving a Dragon and Valvatorez.

Valvatorez in the game's foyer.

Magichange between a Female Warrior and a Giant Wood Golem.

Omega Wind
Add a photo to this gallery

Retrieved from "https://disgaea.fandom.com/wiki/Disgaea_4:_A_Promise_Unforgotten?oldid=46202"
Community content is available under CC-BY-SA unless otherwise noted.