Disgaea Wiki
Register
Don't have an account?
Sign In
Advertisement
in: Articles to be expanded, Games, Disgaea 3

Disgaea 3: Absence of Justice (魔界戦記ディスガイア3, Makai Senki Disugaia Surī, literally: Netherworld Battle Chronicle Disgaea Three) is the third game in the Disgaea series and the first game to be released on the Playstation 3. It follows Mao, the primary Honor Student of Maritsu Evil Academy, who is attempting to kill his own father, the current Overlord. To this end, he tries to gain the necessary power in various ways. D3 was released in Japan on January 31, 2008, with an American release on August 26, 2008.

The game features the same gameplay as Disgaea 1 and 2, with additional gameplay features, such as Magichange and Evilities. The game also tweaks a familiar system changing the geo panels and how they function.

Magichange is a special Monster command where a Monster Unit transforms into a weapon, having 30% of its original stats and the Human character gaining its Evility and exclusive Magichange skills. Magichange lasts for 2 turns (modifiable through clubs or evilities) and the Monster that Magichanged will be counted as defeated.

A new feature is added, called Clubs. Clubs are special groups; assigning a character to a club in Homeroom will allow the character to gain access to special bonuses (i.e. Experience + 25%, Increased Magichange Turns). Characters can only be part of one club at a time, and monsters can only Magichange with Humans in the same club.

Evilities are similar to the unique abilties for each character from Disgaea 2, and while characters have 1 primary Evility, they can equip any secondary Evility as long as it is not unique to another character. They have a wide variety of effects, such as Star Body reducing Star damage by 50% or Violence increasing all stats by 50% and reducing Experience gain by 50%.

A new feature in Item World is Reverse Pirating, by defeating Pirates and clearing the stage they appear on. The player can pass a bill which allows them to Reverse Pirate. It requires a Pirate Ship and on Floors 20, 40, 60, 80 and 100(must be cleared first), the player will travel to a stage filled with Chests, Innocents and a Level Sphere. The player can throw the Innocents and other items to the Pirate Ship to gain their bonuses.

A port of Disgaea 3 called Disgaea 3: Absence of Detention is available for the Playstation Vita. The Vita version contains 2 brand new characters (Rutile and Stella) not seen in other Disgaea games, 4 new scenarios, updated character portraits and Tera level magic. 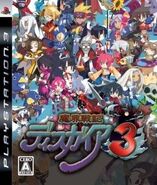 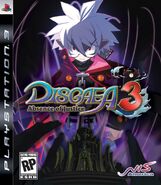 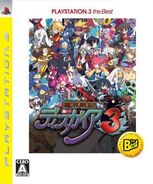 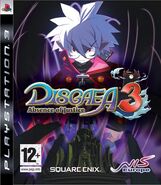 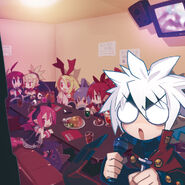 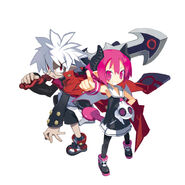