Disgaea: Hour of Darkness (魔界戦記 ディスガイア, Makai Senki Disugaia, lit. Netherworld Battle Chronicle Disgaea) is the first game in the Disgaea video game series. It was released in Japan on January 30, 2003, and in the US on August 27, 2003. It has since been enhanced and rereleased as Afternoon of Darkness, DS, PC, and Complete.

The story follows Laharl, the arrogant prince of the Netherworld, as he fights numerous battles in order to take his rightful place on the throne after his father and the Netherworld's previous overlord, King Krichevskoy, meets his demise by unknown causes.

King Krichevskoy, the overlord of the Netherworld, one day met an untimely demise. Following his passing, countless demons with a bold mind to take his throne began to rise up. Laharl, the prince of the Netherworld and Krichevskoy's son, was asleep during these events. Two years later, he was awoken by his vassal, Etna, who passed on to him the late news of his father and the demon uprising. Seemingly unfazed by his father's death, Laharl sets out to take his rightful place on the throne, and defeat anyone who dares to take it from him.

Disgaea: Hour of Darkness is a traditional grid-based tactical RPG. The player is able to deploy up to 10 characters, humanoid and monster, on a map at a time, allowing all 10 to execute actions in one go, and then proceeding to the enemy's phase. The player selects a character, opening up a menu with possible actions. Each character may move (which occurs instantly) and perform an action (Attack, Special, Lift/Throw and Item) each turn. Once an action has been selected, the player can then assign actions to other characters, or select "Execute" to cause all characters with actions assigned to perform them. Selecting "End Turn" will cause all characters with actions assigned to perform them, and then pass over immediately to the enemy's turn.

Disgaea is made unique by its high focus on level grinding for stat improvement. Unlike other TRPGs, Disgaea sets its level cap at 9999 and allows the player to reach it multiple times. In addition, the player is able to level up items to further improve stat bonuses.

The game is divided into 14 main chapters, each with a number of maps. Other locations are unlockable by passing bills in the Dark Assembly. Laharl's Castle serves as a hub throughout the game, allowing the player to access various Shops, the Hospital, the Dark Assembly and other features. Maps, both completed and new, can be accessed by talking to the Dimensional Gatekeeper.

Throwing is another unique feature of Disgaea. Humanoid player characters can pick up allies, enemies and Geo Symbols and then throw them. There are many benefits to doing this: moving a character nearer to an enemy to attack them; destroying Geo Symbols; and accessing out-of-reach locations; among others. Throwing one enemy creature onto another enemy creature will fuse the enemies together, combining their levels and stats, and can be a good way to increase EXP gain.

Like many TRPGs, Disgaea has a class system and offers a wide range of different humanoid and monster classes. Each class has different aptitudes for stats and weapons, and may possess their own unique skills. New classes and more advanced forms of existing ones can be unlocked by leveling up certain classes or defeating them in combat. An existing character can spend Mana to create a "pupil" in a class, and will receive stat bonuses from doing so. The player can also Transmigrate characters into new classes, allowing them to learn new skills while keeping some of their old ones.

The terrain in Disgaea is sometimes covered in coloured panels known as "Geo Panels". If a pyramid known as a "Geo Symbol" is placed on one, the effect of that Geo Symbol is transferred to all panels of the same colour. Characters placed on a panel will be affected by that symbol, be it positive or negative. Destroying a Geo Symbol will cause all panels of the same colour to change to the colour of that symbol, while destroying a "Null" symbol will destroy all Geo Panels affected by that symbol. This is known as a Geo Chain reaction, and will boost the Bonus Gauge.

The Dark Assembly allows players to create new characters, unlock secret classes, open secret levels, and many other things at the cost of Mana. Certain acts require the player to enter a courtroom-like setting and bribe the senators to approve the bill. If the bill fails, the player may choose to fight the Dark Assembly and persuade them by force.

The Item World is a randomly generated dungeon that allows the player to level up their items by defeating floors of enemies. Specialists can be defeated to increase various stats of the item. Items of different rarities have different numbers of levels. On certain levels, special enemies (Item Generals, Kings and Gods) can be defeated.

Items can be bought from the store in Laharl's Castle, stolen from enemies, given by the Hospital or received as prizes from the Bonus Gauge after each battle. Each item has individual stats, slots for Specialists, a rank and rarity, which all affect the cost and potential of the item.

The PSP port of Disgaea: Hour of Darkness added new features, the largest of which was Etna Mode, an entirely separate storyline to the main and canonical storyline of the game.

On March 5, Weekly Famitsu stated that there had been an official announcement for Disgaea DS (魔界戦記ディスガイア 魔界の王子と赤い月, Makai Senki Disugaia Makai no Ōji to Akai Tsuki or Netherworld Battle Chronicle, Disgaea: The Prince of the Netherworld and the Red Moon in English) for the Nintendo DS.

On March 7, NIS America released a statement on the US release of the new edition of Disgaea: Hour of Darkness for the Nintendo DS. The game is a port of the PSP version, and includes multiplayer gameplay and Etna mode. In order to fully utilize the Nintendo DS' capabilities, several key improvements have been made to the user interface and game system.

Disgaea DS was released in North America on September 23, 2008, through distributor NIS America.

On April 18th, 2018, NIS announced that for the 15th anniversary of the Disgaea series, the original game would be getting an HD remaster for the PlayStation 4 and Nintendo Switch to be released later in the year. 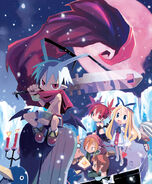