Michelle Ruff
“Desco is gonna become a magnificent final boss! I hope I will have your blessings, Big Sis!”
—Desco, Disgaea 4: A Promise Unforgotten

Desco is the prototype of DES X, and a man-made demon created by humans to be the ultimate weapon. She was abandoned in Hades for being defeated by DES X.

Because of her destructive potential, she was sealed in order to contain her power, but Axel, thinking she would do his bidding, releases the seal and unleashes the "terrifying monster". In order to show off how Final Boss-like she is, she seemingly vaporizes Axel, and then proceeded to fight Valvatorez, Fenrich, and Fuka, who had recently joined the main party. Upon her defeat, she thought she was going to be abandoned again for losing to a band of "heroes" who weren't really heroes, and began to cry. Shocked by this revelation, and by the fact that she was an artificial demon created by human hands, Valvatorez declares that he will re-educate the demons and humans for their foolishness. Valvatorez decides to take Desco along with his party, especially after Desco reveals that Fuka is her "Big Sis", much to Fuka's surprise. She calls Fuka "Big Sis", because she was artificially created by Fuka's father for Fuka who wanted a little sister with advanced functionality who could help her take over the world.

If the player lost to Desco during her boss battle, she proceeded to destroy the rest of the Netherworld on Fuka's orders. The Corrupternment couldn't stop her, and the Netherworld was destroyed in a mere seven days. Having given up on stopping Desco, the Corrupternment decided to try and convince Fuka into admitting that Desco is her little sister. After over 1070 demands were met, Fuka finally approved of Desco as a little sister.

Desco comes running to Valvatorez for help. She tells him that Fuka's been horrible, and that she was "so over" taking over the world. Now she feels that her existence is no longer valid, leaving her to wonder what the purpose of her existence was. Valvatorez tells Desco that she shouldn't be upset about this, and makes mention that he thought she may have potential. That's when Desco asks Valvatorez if he had expectations for her, Valvatorez then explains to her that he was thinking that she could watch his back in his final battle against Almighty God, whom he may have to fight eventually, and Desco's power would be very much needed. Desco agrees and comes with Valvatorez in order to "annihilate God", dubbing Valvatorez her "Big Bro".

Both Fuka and Desco star in a DLC Scenario called the Fuka and Desco Show. It details how Fuka is attempting to reincarnate for her sins with Desco trying to cope with her sister's decision. Desco, along with Vulcanus, helps Fuka steal money from the Netherworld Mint to pay for her sins. When she learns what will happen if Fuka reincarnates for her sins, she is greatly saddened by the fact that Fuka will lose all of her memories.

Despite this, Fuka tells Desco that she'll always be her baby sister. After raiding the Mint, Desco helps Fuka fight for her existance as herself rather than becoming a Prinny and forms the "Big Sis Bodyguards". Fuka eventually overcomes both Valvatorez and Fenrich, with Valvatorez letting her continue Fuka's existance as herself. However, Fuka still wants to reincarnate, leaving Desco in shock and spliting into two because of her uncontrollable emotions.

This led to the creation of Torn Desco who seeked to turn the Blight House into Bis Sis Loveland, hoping to attract Fuka there. As Fuka denies Torn Desco's offerings, Desco starts to come to terms with her sister's decision. At the President's Office, Torn Desco wonders why Fuka isn't interested in Big Sis Loveland, leaving her to call Fuka stupid. The real Desco stands up for Fuka, stating as a final boss, she'll accept Fuka's decision. Torn Desco is defeated, then learns why Fuka does not want to remain in the Netherworld. She fuses back into Desco, and Fuka decides to conquer the world with Desco as a one last memory.

They go to Earth, defeating many Defenders of Earth in their way. Des X reappears to them as Earth X and their final challenge. After being defeated, Earth leaves the Earth in Fuka and Desco's hands. After saying her goodbyes, Fuka tries to reincarnate but cannot due to the grave sins she commited(stealing from the Mint, refusing to become a Prinny and taking over Earth). Desco being glad that Fuka is still with her, they decide to conquer the Netherworld and Celestia next.

Desco has a dream of becoming a final boss. She is usually very upbeat and excitable. Desco is also known for talking in the third person, and is very naive. She is greatly attached to Fuka, and always thinks of her as her Big Sis, and calls her as such. Desco likes to make note of characteristics and traits that are final boss-like, and hopes to emulate those traits in the future, and always looks to get stronger, all for her Big sister's sake. She, along with Fuka, strikes a friendship with Vulcanus, often forming a gossip circle with them talking about Valvatorez and Fenrich's relationship.

Desco greatly cares for Fuka as she did not want her to reincarnate in the Fuka and Desco Show, for Fuka would have forgotten all about Desco. When Desco split into Torn Desco, she tried building Big Sis Loveland in order to keep Fuka from leaving the Netherworld and reincarnating.

She seems to view Valvatorez as a mentor, which is why she came running to him after Fuka was done with taking over the world. Then again, Valvatorez did promise to make her into a "Magnificent Final Boss". At the end of her ending in the game, she even starts calling him "Big Bro" after she choose to help him defeat God.

Desco is afraid of Fenrich. She often cowers behind Fuka when he makes a death threat. Nevertheless, she, like the other girls in the main party, are interested in his and Valvatorez's relationship.

It is shown in her ending of the game that Desco feels that taking over the world with Fuka as a final boss is her very reason to exist, and is greatly saddened when Fuka was "So over taking over the world". This is also prominant in the Fuka and Desco Show, when Desco feels that Fuka's dream of world domination is her wish for when she bribes Death. Desco thought if that were to happen, she will have no reason to exist.

Desco's unique class is Supposed Final Boss. Her highest aptitudes are in HP and Hit, followed by RES, SPD, and ATK, making her an excellent offensive character. Her Evilities all focus on attack power increase : Final Boss Setting (Her native Evility) gives her a 20% attack boost for every adjacent ally, 3 Transformations increases her attack power by another 20% when her HP drops to below 2/3 and 1/3 of her max HP, and Mana Scarcity cuts her Mana gain in half, but increases her attack power by 50%. Because of how these bonuses can be stacked together and combined with other bonuses (For examples, the Beastmasters' Evilities and skills), and how her range increases tremendously when magichanged with another character, Desco is a potentially deadly character.

Desco, along with Fuka, appears as a playable character in Disgaea 3: Absence of Detention. In this title, she is able to Magichange into an Axe as opposed to a sword. The player can also unlock a "Mass Produced Desco" class for character creation, similar to the Mass Produced Kurtis class from Disgaea 2.

Desco, along with Fuka, makes an appearance in Disgaea D2: A Brighter Darkness as a DLC characters. They were be able to be downloaded free at the game's first month of release in Japan. After that, they cost the same as other DLC characters. Desco and Fuka can be downloaded in a $2.99 DLC bundle in the NA PSN Store.

She has been considerably nerfed in Disgaea D2 since her default movement range is 3, and she takes more EXP to level up than other unique characters. Desco retains all her skills from Disgaea 4, but her Yog Sothoth has been changed to only hit a 3x3 area in front of Desco, rather than having a free range of 5.

Desco returns in Disgaea 5: Alliance of Vengeance as a DLC character. She is seen in a DLC story mode along with Fuka and Emizel.

Desco retained all her stats and skills from Disgaea D2, and possess an overload skill Channel Azi Dahaka, which can cause an instant deathblow to any characters weaker than her within 5 panels.

She can also execute a combination attack with Fuka called Full Desco Burst. 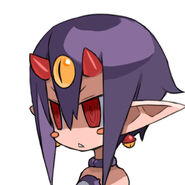 Desco's concept art.
Add a photo to this gallery
Retrieved from "https://disgaea.fandom.com/wiki/Desco?oldid=50749"
Community content is available under CC-BY-SA unless otherwise noted.