Start a Wiki
The Demon Prince (also known as Tyrant) is Laharl's exclusive class in Disgaea: Hour of Darkness and its remakes. It is usually added to the player's team at the very beginning of the game, but is not available during Etna Mode in Disgaea: Afternoon of Darkness and Disgaea DS. If the player has defeated Baal, then Laharl will not be renamed "Demon Prince" upon starting a new cycle (but will keep the Baal title).

“Ora! Here I come! / Wha! Ha! Bite the dust! / Here I come! Haaahahahaha!”
—Laharl “His father was Krichevskoy, King of the Netherworld, and his mother was a witch-in-training from the Human World. Laharl hates words like love and kindness because they were things his mother preached to him before sacrificing herself to save his life. After his father's death he fights to take over the throne. Though he trains everyday to surpass his predecessor, he's very selfish and self-centered.”
—The World of Disgaea 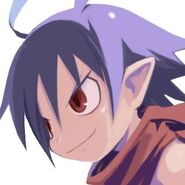 Cut-In image
Add a photo to this gallery
Retrieved from "https://disgaea.fandom.com/wiki/Demon_Prince?oldid=46454"
Community content is available under CC-BY-SA unless otherwise noted.