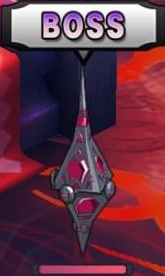 Dark Bit is a crystal of shadowy being found in Disgaea 5: Alliance of Vengeance, serving almost as a replacement for the absence of Pringer X which had appeared in previous titles. It first appearance is at the Chapter 16 final stage.

Despite being weaker than Pringer X, it is still not to be underestimated.

It makes its second appearance under the name Ball Bit, during the Celestial Hell Stage after the update on July 29th 2015 in the Japanese version (the update came out along with Disgaea 5 English Version), where the player fights Baal. The bits possess magic Skills and Evilities equivalent to their color and are of the same strength as Pringer X.
(Red Ball Bit: Fire, Green Ball Bit: Wind, Blue Ball Bit: Ice, Yellow Ball Bit: Star)

This article is a stub. Please help the Disgaea Wiki by expanding it, so it won't stay a little shrimp like Laharl.
Retrieved from "https://disgaea.fandom.com/wiki/Dark_Bit?oldid=40849"
Community content is available under CC-BY-SA unless otherwise noted.