The Celestial Host, otherwise known as Angels, are one of the final humanoid classes of Disgaea: Hour of Darkness. For all of the tiers, all stats' aptitudes are 100%, save for Resistance, which is 110%. Likewise, all angels all have 'A' Weapon Mastery in Sword, Staff, Spear, and Bow. On top of this, Angels can learn Heal, Mega Heal, Giga Heal, and Espoir, and one element of spells up to Giga, making them the most versatile humanoid characters next to the Majin.

As opponents, however, they can be absolutely devastating. They appear all over Celestia in the Final Chapter of Laharl's story, as well as on the very last map of Etna Mode. They are also known to be enemies in the Item World, but only in the higher rank items.

In order to unlock the angel class, a player must have the following characters existing on their team at the same time:

All Spell ranges are dependent on Staff mastery and the level of the spell.

Any incarnation of a Celestial Host can only learn one element's spells at a time, not including elemental affinities retained from previous reincarnations or spells learned from a Pupil.

The celestial host is comprised of angels who have displayed great skill in battle. They excel in both offense and defense, and their rank and wingspan are determined by their spiritual power. They believe in absolute righteousness of the angels, and they eliminate all who oppose them. They can be stubborn. 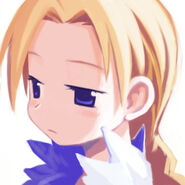 Celestial Host's Concept Art
Add a photo to this gallery
Retrieved from "https://disgaea.fandom.com/wiki/Celestial_Host_(Disgaea)?oldid=46097"
Community content is available under CC-BY-SA unless otherwise noted.