Celestia is a realm populated by Angels and is the equivalent of "heaven" to demons. It is a separate dimension where good humans go when they die. Like the Netherworld, Celestia employs Prinnies. However, there, they only perform chores and do not participate in combat. While there are multiple Netherworlds, there is only one Celestia.

The only known Celestia was introduced in Disgaea: Hour of Darkness. This Celestia is connected to Laharl's Netherworld by a sealed gate. It is initially explored when Flonne is pictured departing, sent off by Lamington, the Seraph who rules over Celestia. The party travels and battles here in the final chapter: What Lies Beyond the Battle.

In the direct sequel game, Disgaea D2: A Brighter Darkness, Celestia features even more prominently when Yuie flowers, native to Celestia, begin to spread across the Netherworld and effect its atmosphere and denizens. A new head Archangel has replaced Vulcanus, implying a rigid hierarchy reigns in Celestia. It is also revealed that under special circumstances, Demons (or at least Half-Demons) can be born into Celestia as Angels. Due to the sheer number of Angels and Demons crossing between the Netherworld and Celestia in this installment, it seems as if the portal between Celestia and Laharl's Netherworld is easier to traverse than between other Netherworlds.

The Raspberyl Mode DLC for Disgaea 3: Absence of Justice has a chapter which reveals that Evil Academy also has a pathway connected to the Celestia featured in Hour of Darkness, allowing the Academy students to (potentially) go to Celestia.

In Disgaea 4: A Promise Unforgotten, a few Angels appear in the Corrupternment-run Netherworld. Due to one of these Angels being from the main Celestia seen in Hour of Darkness, it is implied that this is the same Celestia as from the previous games.

In the The Guided Fate Paradox, a tangentially related game made by Nippon-Ichi, revolves around Celestia as its main setting. In this game, it is clearly stated that there are a multitude of parallel Celestia Dimensions, and many of the Angel denizens that appear are known to former Demons from a Netherworld. Conversely, some Demons in this game are said to have once been Angels. Over the course of the game, the ever-escalating war between the Netherworld and the Celestia dimensions shows the Celestian side losing. They have to constantly choose a new "God" figure to train as their leader, implying that the leadership situation in Celestia is about as stable as it is in most Netherworlds. 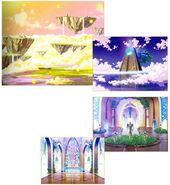 This article is a stub. Please help the Disgaea Wiki by expanding it, so it won't stay a little shrimp like Laharl.
Retrieved from "https://disgaea.fandom.com/wiki/Celestia?oldid=35045"
Community content is available under CC-BY-SA unless otherwise noted.