Start a Wiki
Captain Gordon is a recurring character in the Disgaea series. Gordon is the "Defender of Earth", charged with protecting Earth with his sidekicks Jennifer and the robot Thursday. Much of his character is a homage to Flash Gordon and other superheroes of that time. Despite his in-game popularity with children, Gordon is shown to be somewhat bumbling and incompetent. Even so, he is a legitmate hero who has saved the Earth many times, and he truly desires to uphold peace and justice.

The 37th among a long line of heroes, Captain Gordon is sent to the Netherworld under orders from the Earth Defense Force to defeat the Overlord of the Netherworld and to prevent a possible invasion. Along with his sidekick Jennifer and the All-Purpose Robot Thursday, Gordon rushes headlong into the Netherworld to protect the Earth once again.

He returns in Disgaea 2 when Kurtis is having trouble with the Kurtis clones. He and Kurtis join the battle as neutral allies. When the Kurtis clones are defeated, Gordon thanks Adell and Rozalin for helping Kurtis and bestows them with the Defender of Earth ID Card. In Disgaea 2: Dark Hero Days Gordon has the same role as he does in Cursed Memories. However, after you beat the second Kurtis Bonus Stage, a bill will appear in the Dark Assembly that lets you unlock Gordon as a playable character.

He returns in Disgaea 3 as part of a DLC that includes Jennifer and Thursday. Like almost all of the Downloadable characters, Gordon tries to become a teacher at Evil Academy. However, Mao and Almaz don't believe that he is a Defender Of Earth due to his Status as a Monster Class Character. Gordon then tries to prove he's not a Monster Class character by initiating a Magichange (since Humanoids can't Magichange, this was the only way to prove himself). Unfortunately for Gordon, he does Magichange (into a sword). Almaz then picks him up and adds him to the inventory, which afterwards makes him a Playable Character. This makes him the only Downloadable character you don't have to battle to recruit.

Captain Gordon also appears in Raspberyl Mode. In the story he, Jennifer and Thursday were tracking down 2 Alien Dragons. They capture one and on their way to get the other one Raspberyl appears to help out, believing the Alien to be the victim. Gordon attempts to introduce himself multiple times but Raspberyl cuts him off right before he gets to his name. After many defeats, Gordon attempts to have one final battle with Raspberyl in the School's Gymnasium. During this battle, Gordon, Jennifer and Thursday all Magichange with a nearby Generic Character. After their defeat, Mao appears and finally tells Raspberyl that she just beat up a Defender of Earth. In the scene afterwords, it's revealed that the Alien Dragons were in fact on their way to invade earth while Gordon was trying to stop them.

Gordon has a great sense of justice, but is dim-witted (Etna once remarks that he looks "About as smart as a rock"). He is also blind to the true intentions of others, and never realizes when he's being tricked until it's too late. However, his sense of justice constantly motivates him even in the darkest hours.

Full-body artwork of Gordon from Disgaea RPG.
Add a photo to this gallery 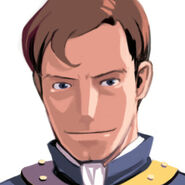 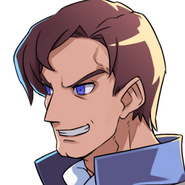 Gordon's Cut-in in Disgaea 3.
Add a photo to this gallery

Gordon's sprite in Disgaea 1 Complete
Add a photo to this gallery
Retrieved from "https://disgaea.fandom.com/wiki/Captain_Gordon?oldid=45522"
Community content is available under CC-BY-SA unless otherwise noted.